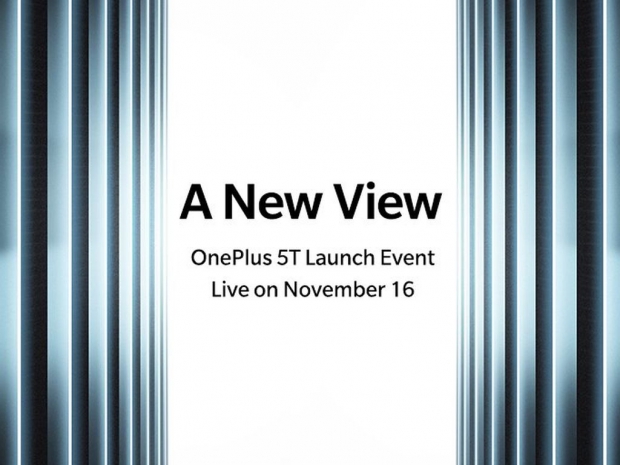 OnePlus has sent out official invites confirming that the OnePlus 5T will be officially launched on November 16th in New York at 11 AM and be available directly from OnePlus and other partners from November 21st.

As noted, OnePlus has officially announced the "A New View" event that will kick off on November 16th at 11 AM in Brooklyn, NY. The event will also be streamed live for those that will be unable to attend and you can check out more details over at Oneplus's dedicated page.

There have been plenty of teasers regarding OnePlus 5T from the company, including the confirmation that it will be keeping the 3.5mm audio jack. Other rumors suggest a 6.0-inch 2160x1080 resolution 18:9 AMOLED screen with slim bezels as well as Qualcomm's latest Snapdragon 835 SoC with 8GB of RAM and 128GB of internal storage. It is also rumored to pack two 20-megapixel rear main cameras and 16-megapixel front camera for video calls and selfies.

It is also expected to run on Google's latest Android 8.0 Oreo OS with Oxygen UI on top of it as well as a heftier battery, at least compared to the OnePlus 5.

Unfortunately, the price rumors were coming from less reliable sources and have put the OnePlus 5T anywhere between US $550 and US $650.

In any case, we'll know for sure on November 16th and while we wait, OnePlus released yet another teaser which you can check out below.

Last modified on 07 November 2017
Rate this item
(0 votes)
Tagged under
More in this category: « iPhone X breaks on the first drop iPhone X Gigabit modem won't fly »
back to top