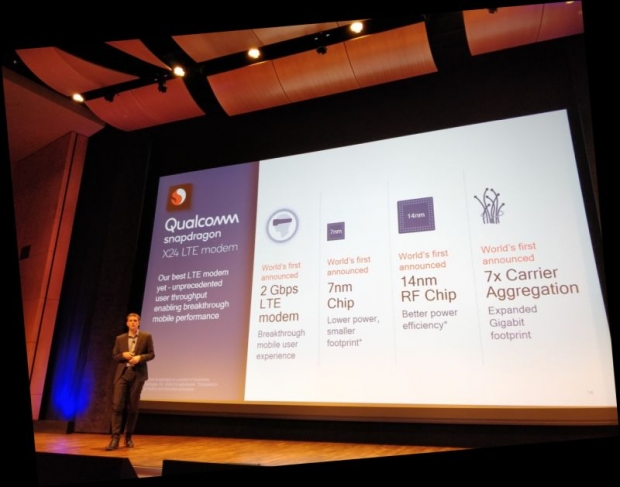 Back in October Fudzilla asked Cristiano Amon, now President and Alex Katouzian VP and general manager of the mobile business at Qualcomm about the future of Gigabit LTE modems and we got a clear indication that things will be faster using the 1.2 GHz Snapdragon X20. The company has just announced that the Snapdragon X24 is the first 7nm chip and not only that, it supports 2Gbps speeds.

Qualcomm managed to double the maximum possible speed within two years. Last year's Snapdragon X20 that is now a part of Snapdragon 845 SoC worked up to 1.2 Gbps, and two years ago Snapdragon X16 worked up to Gigabit LTE and was a big deal.

Fudzilla has pointed out a few times that Gigabit LTE and faster speeds will be crucial for future 5G use, because in 2019 when the 5G story starts, you will be using 4G and 5G modems simultaneously for the best experience. Fast 4G will make the 5G expansions more seamless and switching from multi Gigabit speeds from 5G to potentially Gigabit or 2 Gigabit LTE 4G won’t feel that painful.

Imagine a scenario where you drop from 4+Gbps 5G NR connection to sub 100 Mbps, you will definitely feel the speed difference, especially when watching 4K video or using an untethered VR. 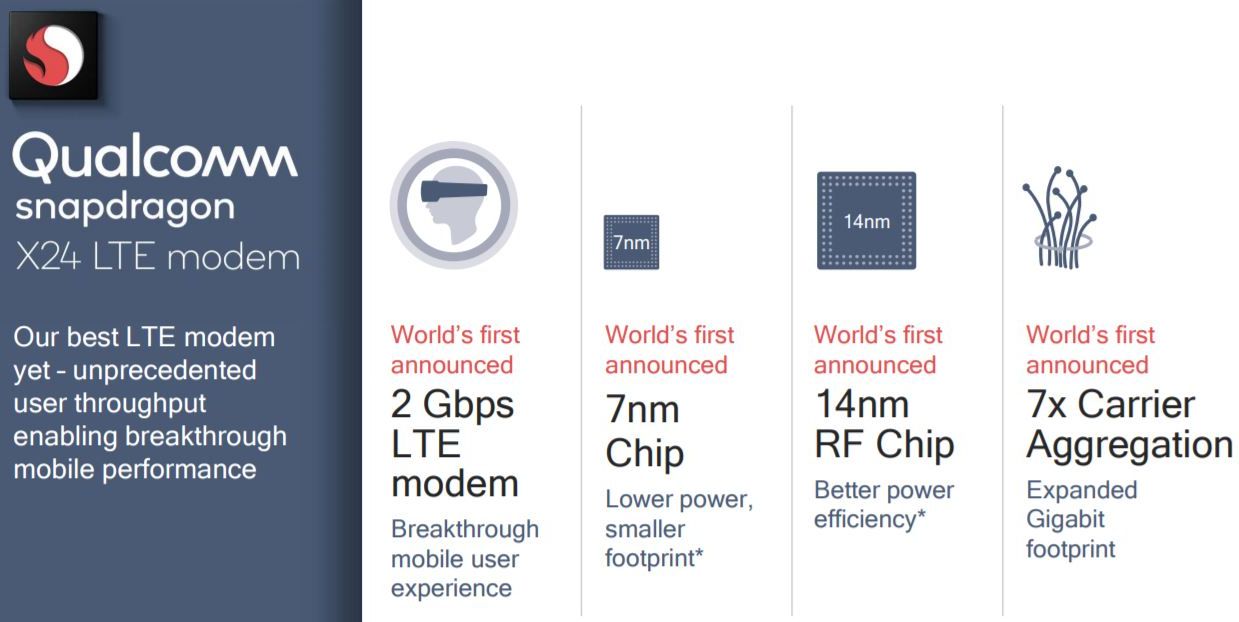 Snapdragon X24 is the world’s first 7nm commercial chip, at least in the industry that Fudzilla readers care about. AMD has announced Vega 7nm for the later part of the year, but Qualcomm has Snapdragon X24 chips sampling today. The commercial launch is in the latter part of 2018.

The 7nm enables lower power and a smaller footprint. The competition at Intel is still struggling to go to 10nm for most of its products.

Qualcomm is using 7 LTE carriers, 3x20 MHz CA and up to 256-QAM, and the combination of these technologies will get you to the magical 2 Gbps. The X24 modem has a Category 20 upload with maximum speed of 316.584 Mbps. This is the company’s eight generation LTE multimode modem and the third generation GigabitLTE.

The upload speed has more than doubled from last year’s best. This is probably even more significant, as guess what, you need upload to send your video clips from your favorite concert or a sporting arena, and boast about it on your favorite social channel.

Intel’s latest and greatest 7560 modem, set for release in 2018, supports release 13 3GPP LTE FDD/TDD with a maximum speed of 1Gbps download and 150 Mbps upload. Apple lovers, this is the modem that you will get in your iPhone 2018 unless you are with Verizon, China Telekom while customers in Japan rely on CMDA. Intel’s best of 2018 is twice as slow in both upload and download speed.

Some of you might wonder how its engineers got to 2.0 Gbps speeds. Just think for a second, this is equivalent fo 249.75 MB download. This equals a 4.7 GB DVD download in 18.81 seconds. Fudzilla pointed out that it will all be about the average speeds and the fact that faster download for performance users can speed up the complete carrier network experience. Everyone will benefit as the X24 download things faster and release the spectrum for the other users.

The Snapdragon X24 supports five 7x carrier aggregation in the downlink, as well as 4x4 MIMO on up to five aggregated LTE carriers for a total of up to 20 concurrent spatial LTE streams. 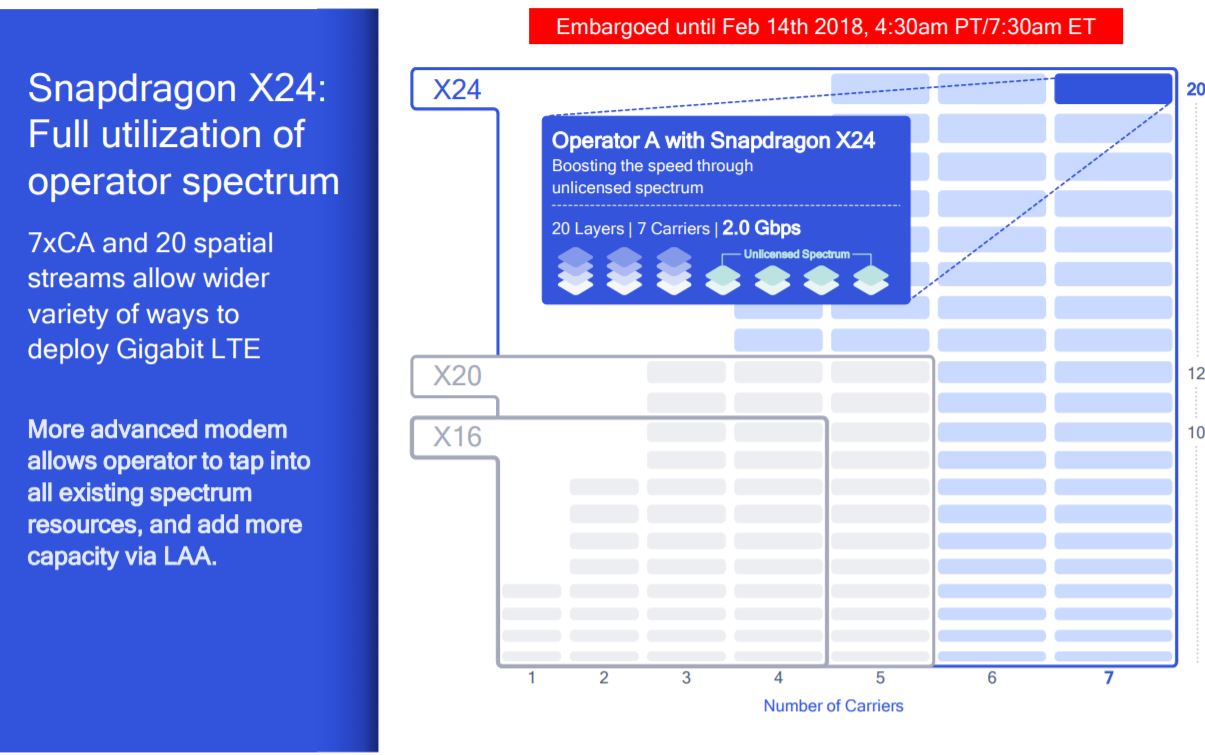 Let’s give you one possible scenario how to get to 2.0Gbps. Qualcomm’s Snapdragon X24 will use seven layers where three of them will be using 4x4 MIMO. This is three times four, times 100 Mbps so each channel gets you to 1.2 Gbps.

Then Snapdragon X24 enables a carrier to use four additional unlicensed spectrum channels each supporting two layers, this gets you an additional 800 Mbps and when you sum these two numbers, you get to 2.0 Gbps, of course as long as your carrier has the spectrum to share and wants to spend all that spectrum.

The Snapdragon X24 will be demonstrated at the upcoming Mobile World Congress in Barcelona in conjunction with Ericsson, NETGEAR and Telstra.

Serge Willenegger, senior vice president and general manager, 4G/5G and Industrial IOT, Qualcomm Wireless GmbH said: “As the world’s first announced Gigabit LTE modem to achieve speeds of up to 2 Gbps, the Snapdragon X24 LTE modem sets a major mobile industry milestone, designed to provide enhanced mobile broadband and deliver an extremely important gigabit coverage layer for commercial 5G networks and mobile devices that are expected to start launching in 2019. Further expanding on the use of 4x4 and LAA capability, the Snapdragon X24 packs a powerful array of the most advanced 4G LTE technologies commercially available, helping mobile operators to fully mobilize their spectrum assets and maximize the capacity of their Gigabit LTE networks, and mobile device makers to offer consumers a tangible glimpse of our 5G future”.

Ericsson Joakim Sorelius, head of product area networks, Ericsson, said: “We’re pushing the boundaries of technology and providing unprecedented advances in LTE evolution by breaking the 2Gbpsbarrier with our partners. This technology advancement will enable even higher network capacity, and hence faster mobile broadband speeds for even more people. Video streaming, interactive live concerts and sports events are putting an even greater demand on capacity and better user experience.”

Channa Seneviratne, executive director network and infrastructure engineering, Telstra, said: “Telstra has been at the forefront of utilizing the latest technologies to achieve faster mobile speeds and more capacity for our customers. We were the first network operator in the world to enable 1 Gbps LTE on a commercial mobile network and we are pleased to be working with Qualcomm Technologies, Ericsson and NETGEAR to leverage these network investments to develop the world’s first 2 Gbps LTE live demonstration to meet the ever-growing demand for data and speed from our customers.”

David Henry, senior vice president, connected home products, at NETGEAR, had this to say:“In 2017, NETGEAR and Telstra launched the world’s first commercial Gigabit LTE device and we are pleased to work with Telstra, Qualcomm Technologies and Ericsson for the next generation of unparalleled mobile devices. We know our customers value faster connectivity in their mobile work environments. This latest innovation represents another significant step up in speed and features that will give customers a real taste of what’s to come with 5G like performance."