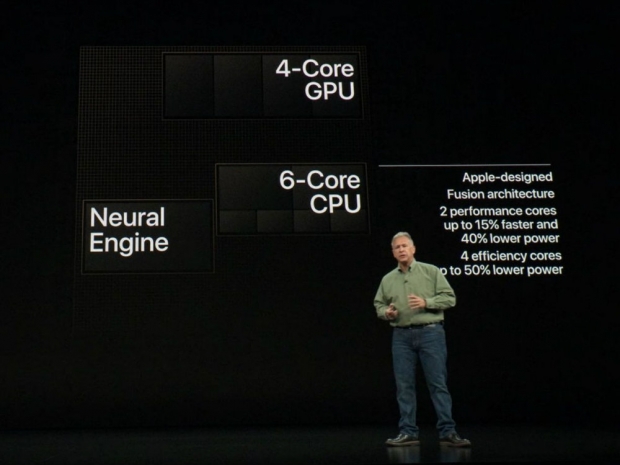 Apple’s A12 Bionic is the name of the most important chip inside the iPhone Xs and Xs Max and Xr detailed here. Make no mistake, this is the first to ship 7nm but not the first to sample or be announced, it is actually the third. As believers in the Apple religion don’t care about features unless they have it in their beloved iPhones, they don’t care about the rest of the world.

This is the first 7nm with 64bit with custom Apple cores using Fusion architecture. In the real world that means big little. They have two big cores and four small ones, something we’ve seen on many ARM based designs. Yes, Apple uses ARM there is no alternative to that.

The A12 Bionic SoC has 6.9 billion transistors which is identical to the recently announced Huawei 980 7nm product.

The two performance cores are 15 percent faster than the A11 Bionic, which is not great. With 7nm, Apple should have been able to squeeze more, but they didn’t. This is  puzzling. The good news is that it delivered 40 percent lower power to these performance cores.

The four efficiency cores have up to 50 percent lower power, while Phil Schiller didn’t really say whether  these cores are faster than last year's A11 10nm SoC. It probably isn’t so he is not bragging about it.

Apple has its own GPU with four cores and it up to 50 percent faster in tessellation and multi-layer rendering. This is fun to read, as modern GPUs were bragging about this more than a decade ago. Still we need to give Apple and every mobile GPU manufacturer some credit as they have to do it in a fraction of the TDP that big desktop or even notebook GPUs have. 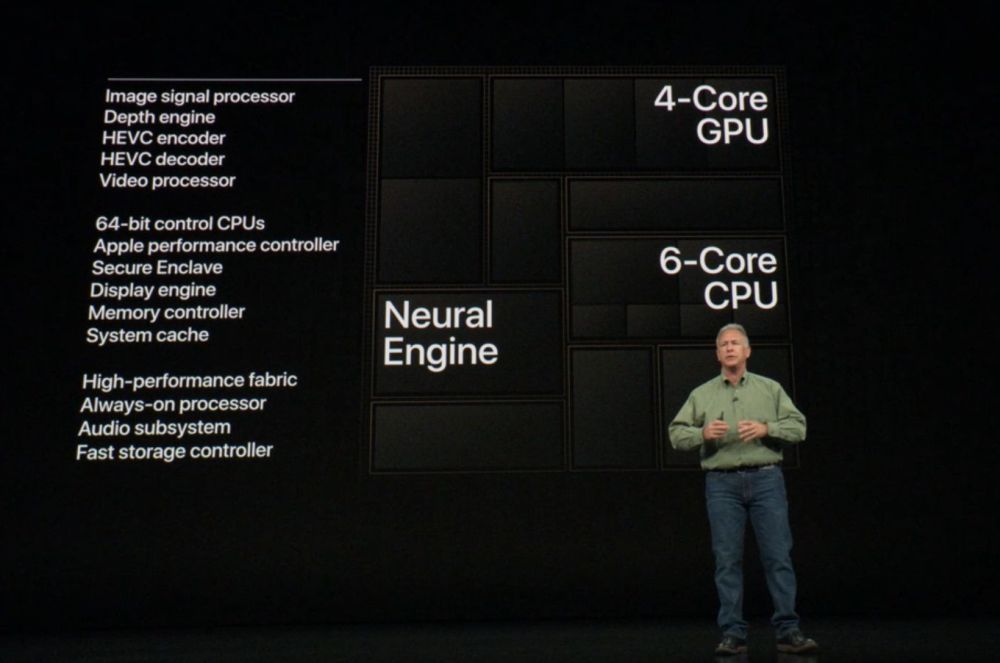 The Apple GPU supports lossless memory compression. Is anyone old enough to remember S3TC?. But, in reality, it didn’t give any performance numbers. It will just be great for you.

Apple claims that it will be faster to run neural network and it can now use scientifically less power in the process. It can come up with great Bokeh computational photos, something that we’ve seen before but they're now better. A great feature will be the ability to change the depth of the photo so if you've already taken a picture you can decide how much you can blur. This is just one example of neural networks. Gallery might be second use case scenario as the phone can do a better job in cataloging pictures.

One thing to bear in mind about the size of the A12 SoC. Apple is 6.9 billion transistors without modem capabilities, while Kirin has a quite powerful modem in the same package and thermal envelope. Apple uses Intel's external  7560 modem.

But Apple’s point is that the A12 is designed for iPhone and the phones are iOS only, which gives them a lot of flexibility and space for optimization compared to the competition. Samsung and Huawei do make SoCs based on Cortex for their own phones while Qualcomm makes the 800 series SoC that fits in 100s of phones, mostly successfully.

The new SoC can address 512 GB internal storage but we are quite sure that this would work with A11 too, but it wasn’t financially wise for Apple to do so. The emphasis on security and the importance of Face ID and its performance is overwhelming but it is one cool feature that we’ve seen on dozens of other phones. Apple claims that its is the best and more secure, but most others work just fine, and no one needs emojis and likely wont'  be copied by competitors either.

A live talking emoji might fly with millennials and post-millennials but it is not a crucial feature. Apple claims it is computationally intensive to do that in real time. You can even Photoshop a cartoon superhero with the AI power of A12 Bionic.

Apple usually has great names for stuff and comes up with a not even Full HD screen and calls it Retina, but Bionic is not cool, not in 2017/2018. 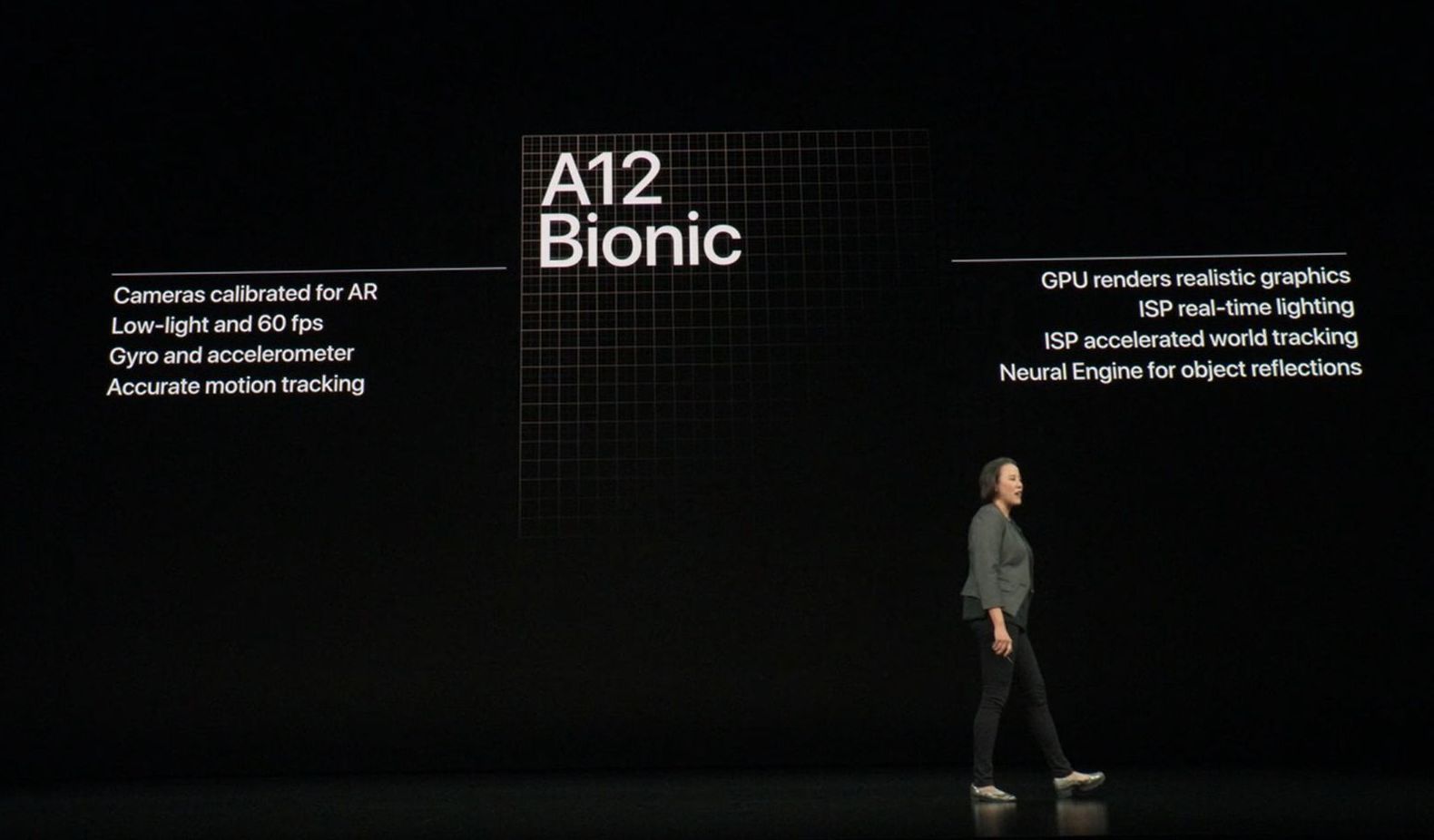 Apple is betting big on GPU realistic AR graphics. Well, a GPU on a mobile phone will not render anything you could seriously call realistic, but it will look good. The ISP (image signaling processor) can take care of the real time lighting and ISP will accelerate world tracking features while the  neural engine can be used for object reflections. This is how Apple plans to hook people on AR gaming.

It has been tried many times before and it is getting better. Part of the secret sauce, according to Apple is a camera calibrated for AR even at low light at 60 FPS. Giro and accelerometer can be used for accurate motion tracking. The gaming demo looked cute.

Overall, this is probably one of the fastest SoCs that will run on iPhone X s generation of phones and it will do its job well. But we will have to wait for the phones to come out to do some serious testing.

Last modified on 12 September 2018
Rate this item
(2 votes)
Tagged under
More in this category: « Apple shows upgraded and bigger iPhones Apple woos the low end with a "cheap" $750 iPhone »
back to top