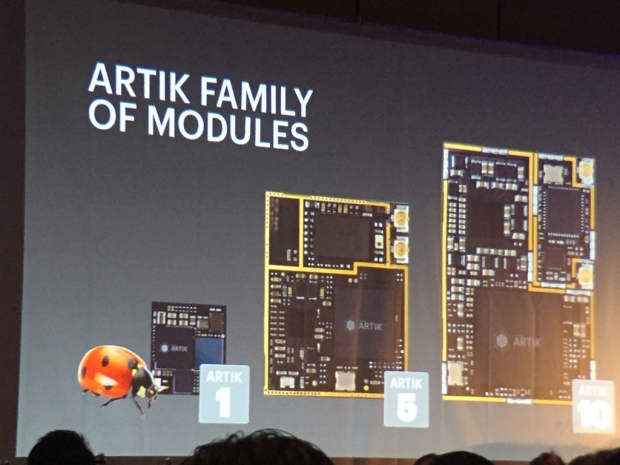 According to the Korean Times the platform has been dubbed ‘Artik’ and it will be sold to global developers and manufacturers and compete against Intel’s ‘Curie’ and ‘Edison’.

Samsung Electronics released beta-version of Artik in early this month and delivered it to few developers and partners. If it can attract some interest, will be possible for Samsung Electronics to sell them in bulk to major customers.

Artik has three chips, the Artik10, Artik5, and Artik1 . They are optimized for home server, network camera, and SmartBand equipment. Its price is set between $85.38 and $853.76 and Samsung Electronics is expecting that shipment of its chips will increase as Artik development boards widely supplied.

Artik1 has MIPS S32 Core-based Micro-Controller (MCU) that operates between 80 and 250 MHz. It has 1 MB D-RAM and a 9-axis sensor that combines gyroscope, acceleration, and geomagnetic sensors. Its communication function supports Bluetooth Low Energy (LE). It will be used for light equipment such as SmartBands where it has the advantage that is smaller than Intel’s offering.

Artik5 is a SoC with two ARM Cortex A7 Cores that operate at 1 GHz. On top of the SoC there is 512 MB LPDDR2 D-RAM and 4 GB embedded Multimedia Card (eMMC) which is layered ePoP-format to decrease size. Artik5 supports wireless LAN, Bluetooth, and Bluetooth LE and it is suitable for  Home Hub and network cameras.

Last modified on 16 November 2015
Rate this item
(2 votes)
Tagged under
More in this category: « Marvell bakes Alaska Li-Fi is 100 times faster than Wi-Fi »
back to top