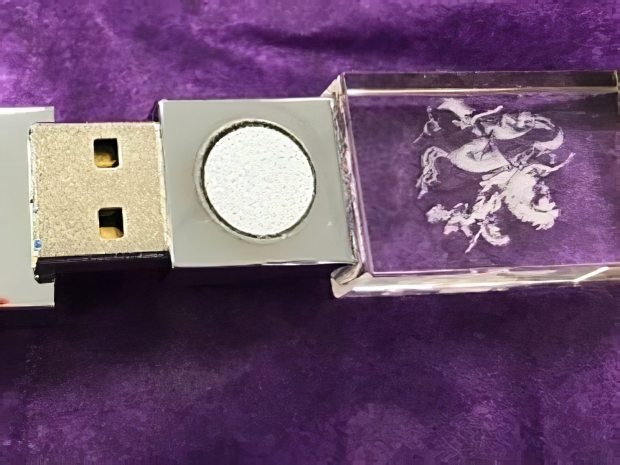 Dumb arsed conspiracy nuts are shelling out £339.60 to protect their families from the evil 5G using a magic USB stick with a paper sticker stuck on it in the bizare belief that it is quantum powered.

The 5GBioShield was seriously recommended by a member of Glastonbury Town Council's 5G Advisory Committee, which has called for an inquiry into 5G on the weight of scientific and engineering advise provided by Toby Hall and his chums.

Hall, said: "We use this device and find it helpful" and provided a link to its website, which describes it as a USB key that "provides protection for your home and family, thanks to the wearable holographic nano-layer catalyser, which can be worn or placed near to a smartphone or any other electrical, radiation or EMF [electromagnetic field] emitting device".

"Through a process of quantum oscillation, the 5GBioShield USB key balances and re-harmonises the disturbing frequencies arising from the electric fog induced by devices, such as laptops, cordless phones, wi-fi, tablets, et cetera," it adds.

Since it was recommended by a member of Glastonbury Town Council's 5G Advisory Committee it must be legit. After all they cannot be stupid because they were selected because they all know about the technology and in the 21st century it has suddenly become vital to listen to the ideas of village idiots.

When quizzed by the BBC, Hall said his remarks in Glastonbury Town Council's 5G Advisory Committee report should not be seen as a recommendation to buy the product.

But he had no regrets about buying it and since plugging it in had felt beneficial effects, including being able to sleep through the night and having more dreams. Presumably these dreams were about him buying a nice bridge in New York.

And he had thought the company might be able to develop a system that could offer protection to the whole town of Glastonbury against the effects of radiation from electromagnetic fields.

The company's website suggests the owner wears the USB stick or places it close to their smartphone. You don't even need to plug it in.

Each of these USB keys costs £339.60 including VAT, though there is a special offer of three for £958.80.  Now if you break them down you discover that it is a USB stick which you can pick up for five quid from China.

What is different is a circular sticker on the inside which looks like it has come from a stationary supplier.  But it is this which has all the quantum magic in it. Well it must have because there is nothing else in the device.

A search in Companies House shows the two directors of BioShield Distribution are Anna Grochowalska and Valerio Laghezza.

Both of them appear to have been involved previously in a business called Immortalis, which sells a dietary supplement called Klotho Formula which uses a "proprietary procedure that leads to relativistic time dilation and biological quantum entanglement at the DNA level".

Grochowalska told BBC News her company was the sole global distributor of the 5GBioShield - but it did not manufacture or own the product.

"We are in possession of a great deal of technical information, with plenty of back-up historical research. As you can understand, we are not authorised to fully disclose all this sensitive information to third parties, for obvious reasons."

And she rejected the suggestion selling a £5 product for more than £300 was unreasonable.

"In regard to the costs analysis your research has produced, I believe that the lack of in-depth information will not drive you to the exact computation of our expenses and production costs, including the cost of IP [intellectual property rights], and so on. It is therefore hard to take your evaluation seriously, since you have evidently not researched the background facts in any meaningful way."

Last modified on 28 May 2020
Rate this item
(1 Vote)
Tagged under
More in this category: « 5G will not save the industry until next year UK will lose 5G lead if Huawei locked out »
back to top