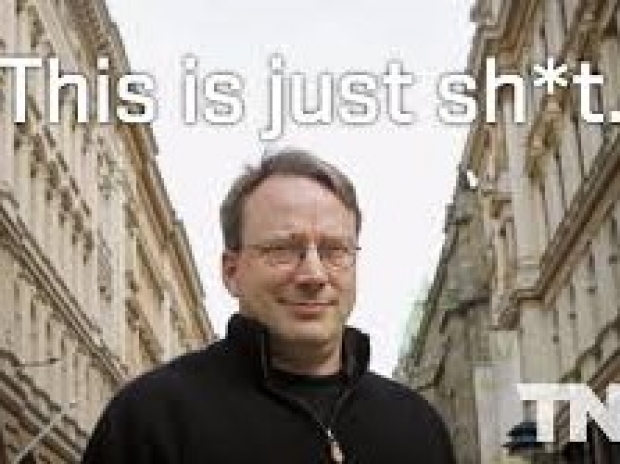 IT's Mr Sweary Linus Torvalds has slammed Intel's new patches designed to fix its chip design flaw as "garbage" and an indication that Chipzilla is not serious about fixing the problem.

Linus calls it "very much part of the whole 'this is complete garbage' issue. The whole IBRS_ALL feature to me very clearly says 'Intel is not serious about this, we'll have an ugly hack that will be so expensive that we don't want to enable it by default because that would look bad in benchmarks".

He said that Intel is trying to push the garbage down to developers and they are doing it entirely wrong, even from a technical standpoint.

"I'm sure there is some lawyer there who says 'we'll have to go through the motions to protect against a lawsuit'. But legal reasons do not make for good technology or good patches that I should apply."

Later Linus said that these "complete and utter garbage" patches were being pushed by someone "for unclear reasons" - and added another criticism.

"The whole point of having cpuid and flags from the microarchitecture is that we can use those to make decisions. But since we already know that the IBRS overhead is huge on existing hardware, all those hardware capability bits are just complete and utter garbage. Nobody sane will use them since the cost is too damn high. So you end up having to look at "which CPU stepping is this" anyway. I think we need something better than this garbage", he ranted.

Last modified on 22 January 2018
Rate this item
(0 votes)
More in this category: « TSMC revenues to grow by at least ten percent this year More Intel Coffee Lake-S CPUs show up online »
back to top