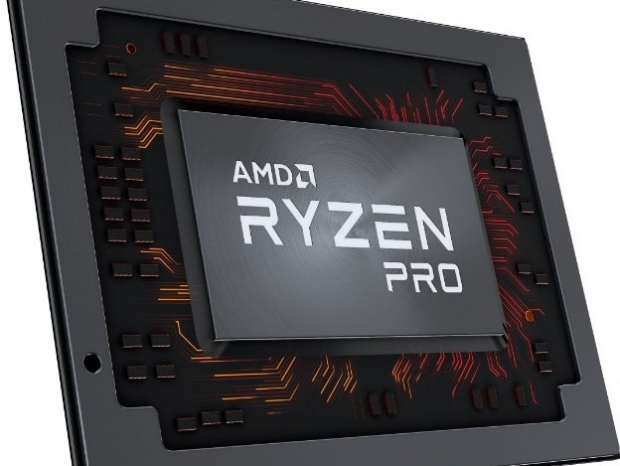 There are a total of seven new APUs - three for the mobile space and four for the desktop.

According to AMD's press release, the first desktops to ship with these latest chips include the HP Elitedesk G4 and 285 Desktop, the Lenovo ThinkCentre M715, and the Dell Optiplex 5055.

AMD claims that the Ryzen PRO has been built from the ground up to focus on three pillars - power, security, and reliability. This means using integrated GuardMI technology, an AES 128-bit encryption engine, Windows 10 Enterprise Security support, and support for fTPM/TPM 2.0 Trusted Platform Module. What one of the features of Ryzen PRO that AMD hopes will appeal to commercial users is the enterprise-grade reliability that the chips come backed with, everything from 18-months of planned software availability, 24-months processor availability, a commercial-grade QA process, 36-month warranty, and enterprise-class manageability.

Ryzen PRO with Vega Graphics is apparently the world's fastest processor currently available for ultrathin commercial notebooks, with the AMD Ryzen 7 PRO 2700U offering up to 22 percent more productivity performance than Intel's 8th-generation Core i7-8550U in testing carried out by AMD.

AMD claims its Ryzen PRO processors are energy efficient, enabling up to 16 hours of battery life in devices, or 10.5 hours of video playback. The Ryzen PRO with Vega Graphics desktop processors are also no slouches, opening up a significant performance gap when compared to Intel Core i5 8400 and Core i3 8100 parts.

Last modified on 15 May 2018
Rate this item
(0 votes)
Tagged under
More in this category: « AMD says Ryzen Threadripper 2000 is sampling Dell not worried by 5G »
back to top