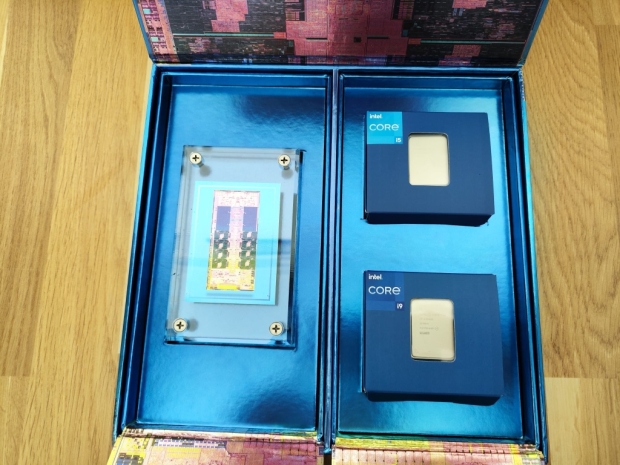 One key thing of hybrid architecture success is the thread director on the operating system level that decides which workload gets on which core. Some might remember one big and four small core notebook processors codenamed Lakefield. Having one large Sunny cove performance and four little Tremont cores. Launched in the second half of 2020, Microsoft had enough time to prepare for Alder Lake in late 2021 and especially Raptor Lake in 2022.

The multi-year journey started in early 2020

Isic Silas Corporate Vice President, Client Platforms Program Office General Manager Client Computing Group, provided an interesting overview of the Raptor Lake Gen 13 journey. In mid-September, as a part of an Israel technology and factory tour, Isic shared that Core i9 version will support DDR5 5600, be the first 1st 6Ghz/ 8Ghz OC, and even hit some world records. We are at this point right now, and 6Ghz is achievable with a decent dual-fan water cooler, while for 8GHz, one needs some LN2 dry ice.

Raptor Lake Gen 13 Core product development started roughly thirty months ago, in early 2020. The first customer committed to this product two years ago. At that point, Intel's design center in Israel had to set features, Thermal Performance, and the Power High-Level Schedule. Isic mentioned that he had to fly to the US and convince management going hetero (hybrid) is the right approach. Keep in mind that adding more smaller cores takes much less die area and still greatly benefits the performance. Raptor Lake proved that proof point.

Some fifteen months ago, Intel powered on the Raptor Lake S CPU, taking anywhere from two to three-quarters from the A0 first tape out until the silicon was successfully powered.

A year ago, Intel had early Engineering samples ES1 / Alpha in its hands and a board bring-up and early Alpha validation. The next silicon step was the ES2 /Beta hardware and Beta validation, followed by QS hardware and QS Qualification Sample and validation. The last stage of development is the PRQ /PV for product pilot and test, and at this phase, the customer's development cycle finishes, and the image freeze. Not long after that one-year journey from the first Alpha ES1 CPU, Intel ships the CPU to customers. That is today.

Thanks to the architecture and platform compatibility with Alder Lake, it took six months less to bring Raptor Lake Gen 13 compared to Alder Lake Gen 12. All this happened at the beginning of Covid 19 pandemic, making things much more challenging. 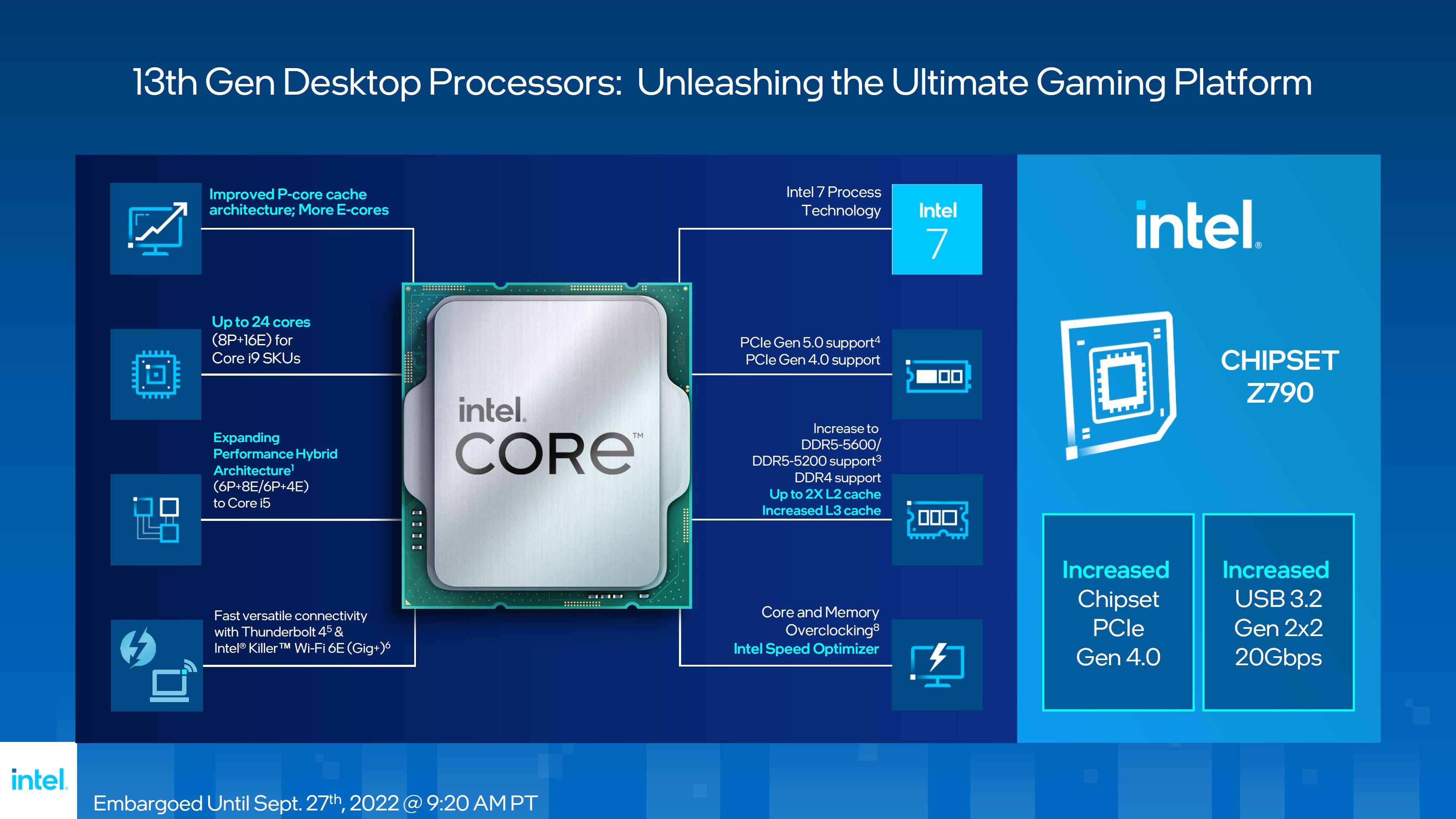 The number of total cores grew from 16 in Gen 12 to 24 in Gen 13 desktop Core. Performance Hybrid also made an appearance in Core i5 more affordable processors. The size of the L2 cache doubled, and the L3 cache was increased. A speed optimizer improved Intel overclocking. It is essential to mention that Gen 13 supports both DDR 4 and DDR5. It gives customers choices and makes a smoother transition. Z670 motherboards support Gen 13 CPUs, making the purchase slightly less expensive than last year. The above is correct if one keeps the alder lake Z670 board or decides to buy an older motherboard, save money, and still purchase a Gen 13 CPU. Customers like Hynix, Corsair, G Skill Crucial, Kingson Fury, Patriot, and T force have a variety of memory modules in both DDR4 and DDR5 variations.

Marcus Kennedy, General Manager of Gaming, Creator, and Esports Segment, showed significant gaming gains of Core i9 13900K versus Core i9 12900K in a big mix of games and significantly faster performance than the Ryzen 9 5950X. At the time of the presentation, AMD still hadn't released its 7000 generation, but many reviewers got them from AMD, and they will be able to show you the actual performance. We asked and failed to obtain a sample from AMD for this review. Ryzen 7 5800X3D does perform better but is very hard to find in the market. Content creation was usually on Intel's side, and the company claimed 34 percent faster content creator workflow than AMD 5000 generation. This assumption was made by picking 70 top games and 60 top creator applications.

Daniel Rogers, Senior Director of Mobile Product Marketing, gave us a better overview of the changes in Raptor Lake Gen 13 desktop CPUs. The Intel 7 manufacturing matured, and this is what contributed significantly to performance improvement. That enabled faster clocked Raptor Cove cores and a Large L2 cache per core that grew to 2MB per core. 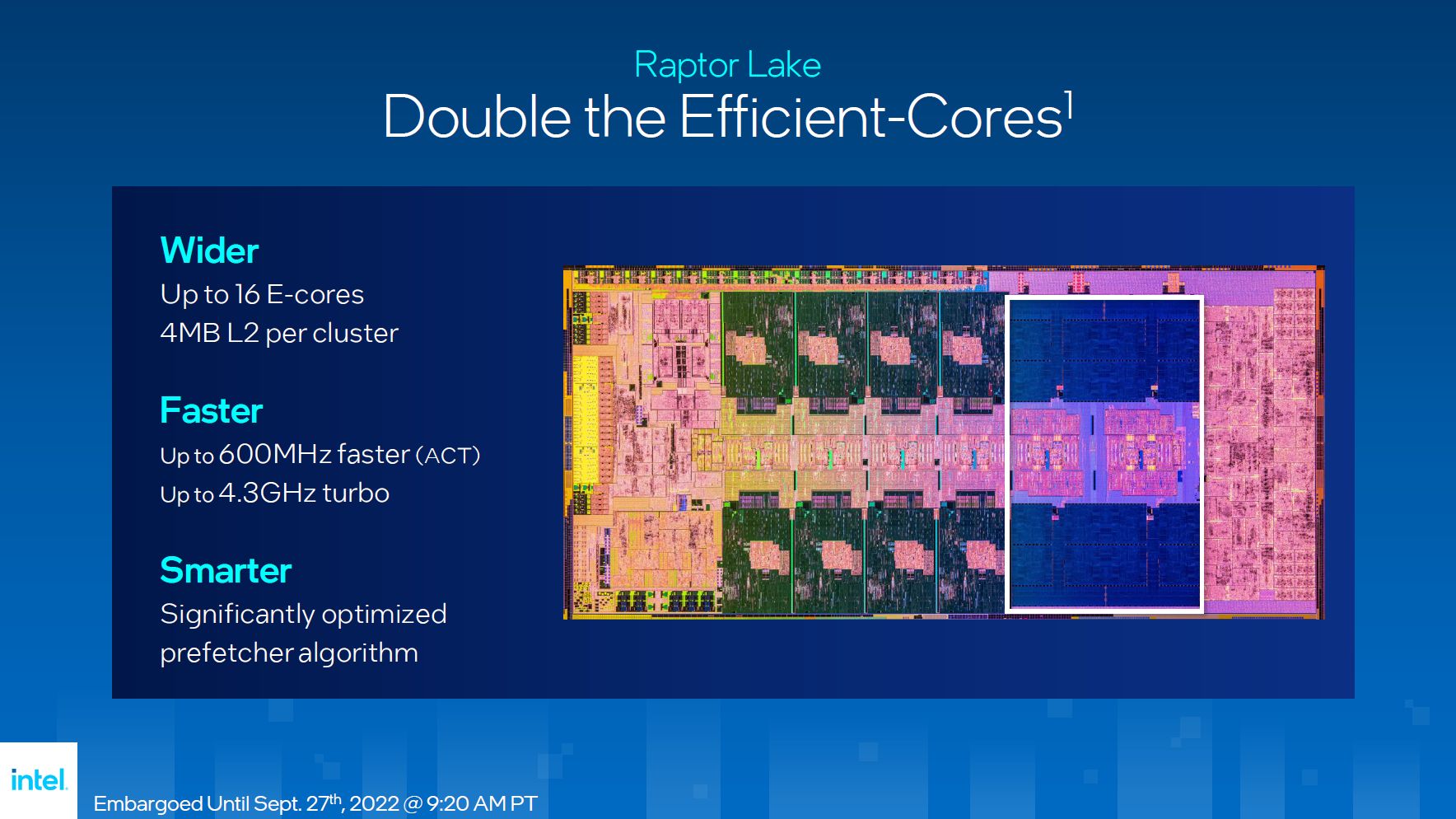 Doubling the efficient cores made a CPU wired. The E cores gained 4MB L2 per cluster. The CPU E cores got 600 MHz faster compared to Gracemont cores from Gen 12 Alder Lake. The new E cores run up to 4.3GHz, and the prefetcher algorithm is significantly more optimized, making it smarter than before.

Where the performance comes from? 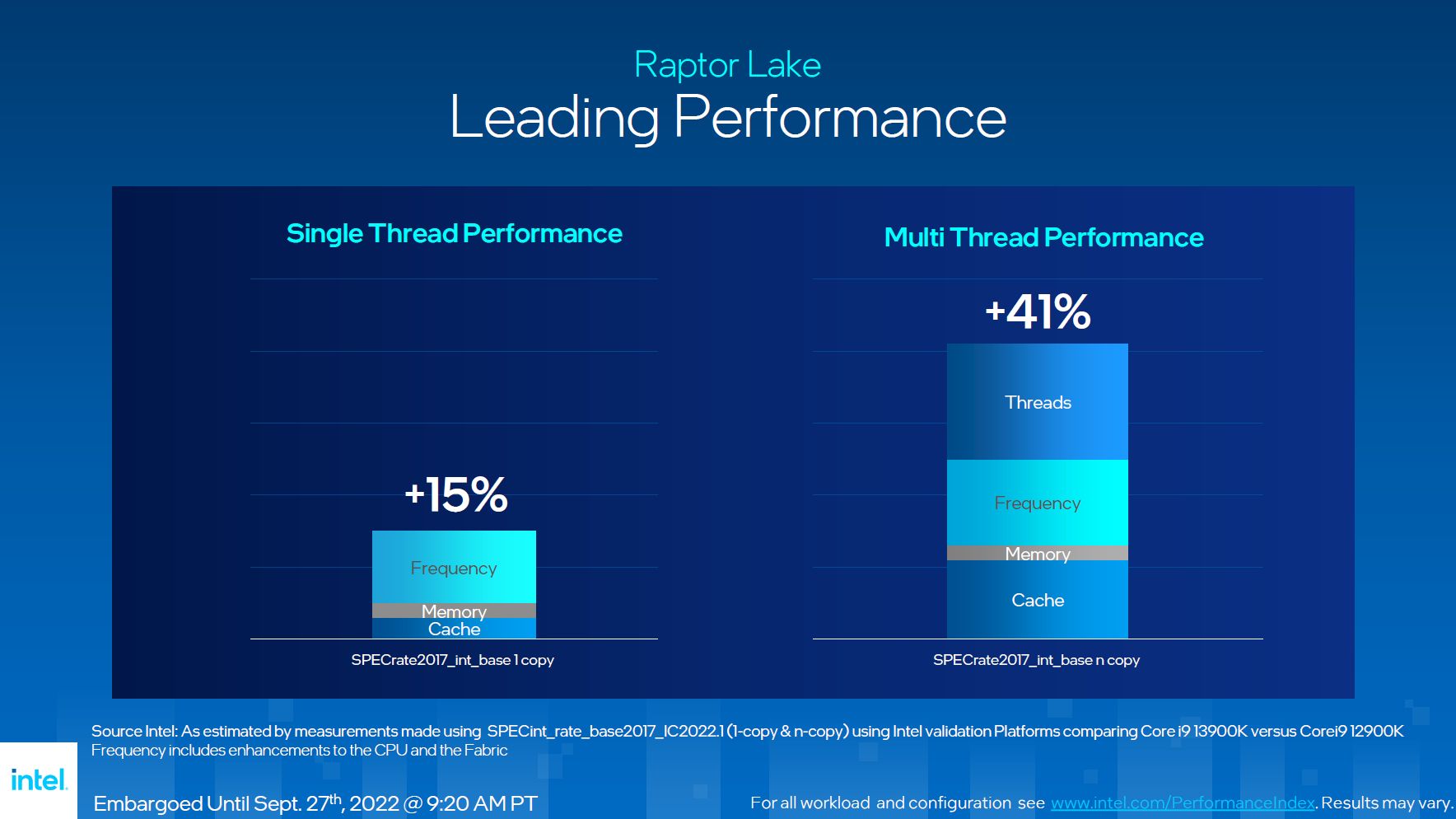 Based on the famous SPECrate2017 test Intel claims that the Raptor Lake Gen 13 generation of desktop CPUs is 15 percent faster than the Gen 12. According to Dan's presentation, the frequency increase contributed close to 10 percent of the gain. The other few percent came from the cache and memory.

The Gen 13 is so efficient that the CPU has similar performance at around 25 percent less power, and the baseline 12900K at 241W ends up on pair in performance at 65W while at the same Wattage of 241W burst, Intel would still be at 37 percent of the Core i9 12900K. All scores are based on platform validations based on SpecInt. 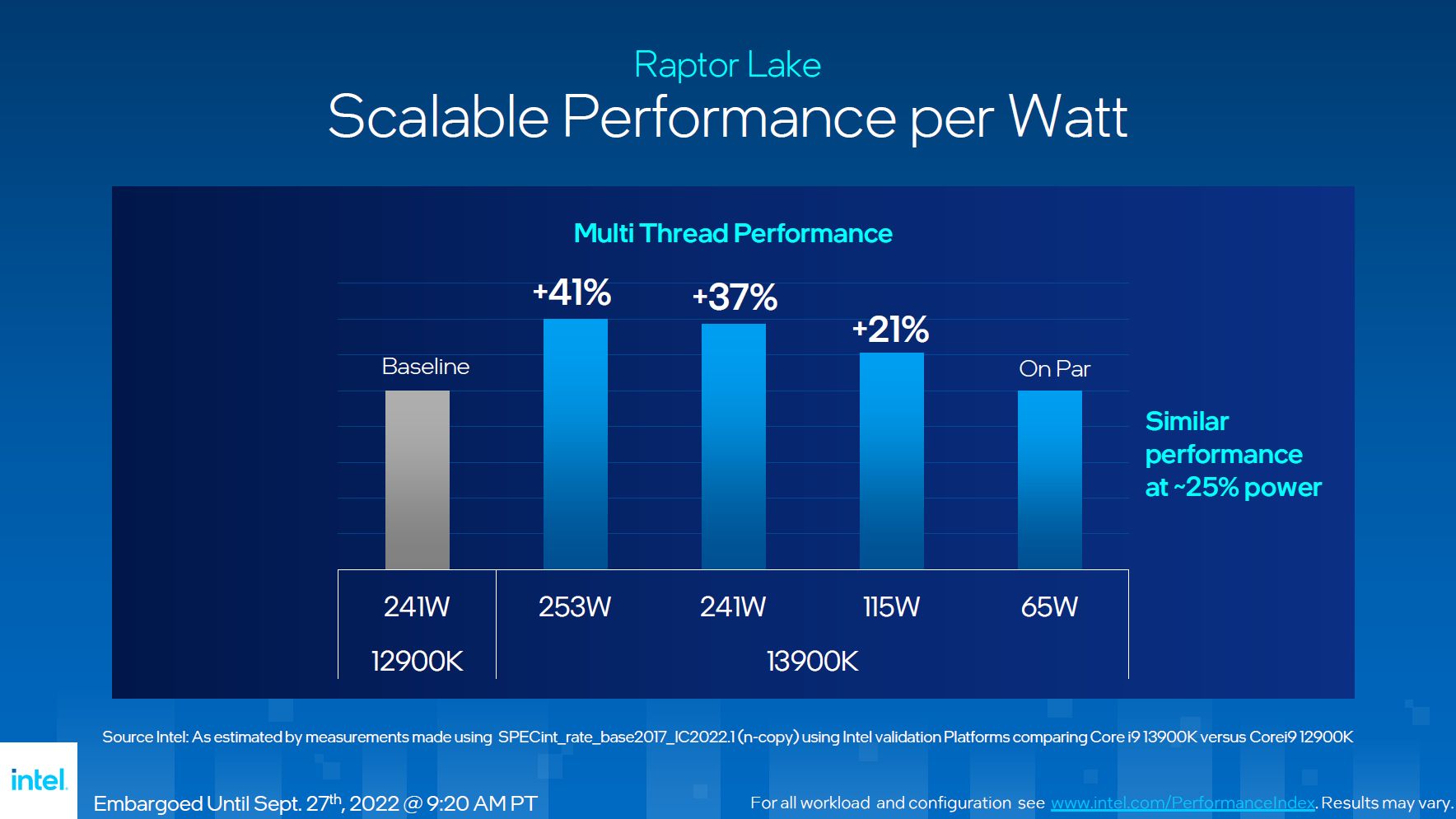 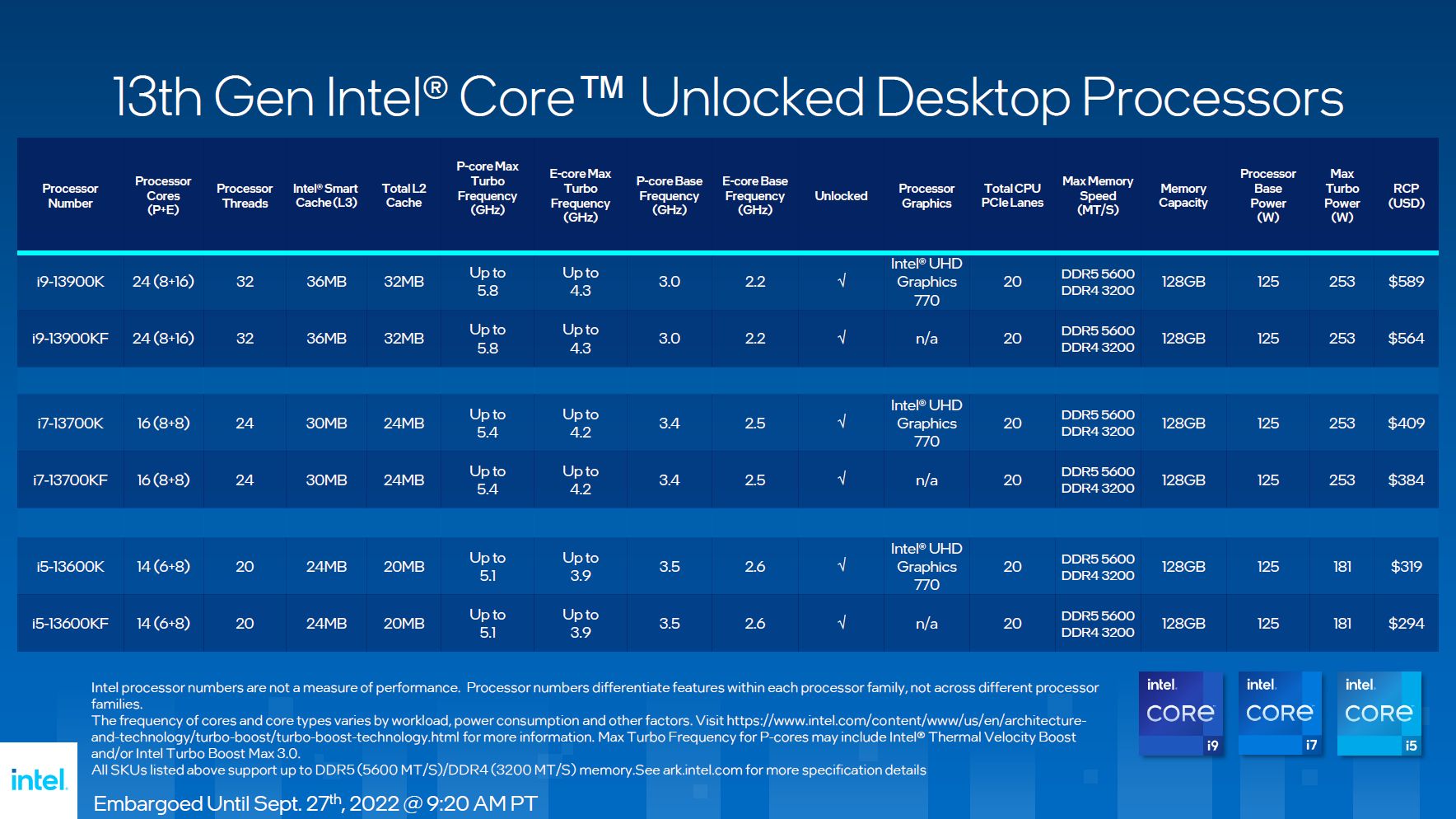 The maximal Turbo frequency is up to 5.8 GHz. Intel Turbo Boost Max Technology 3.0 Frequency goes to 5.7 GHz. Performance core Max Turbo frequency goes up to 5.4GHz while efficient core Max turbo goes to 4.3GHz. The base processor frequency is at 3.0GHz, while the base for efficiency cores is 2.2GHz. The maximal number of threads is 32, and the K version supports Intel UHD Graphics 770, while the Core i9 13900KF comes without a GPU enabled. GPU runs at 1650 MHz. 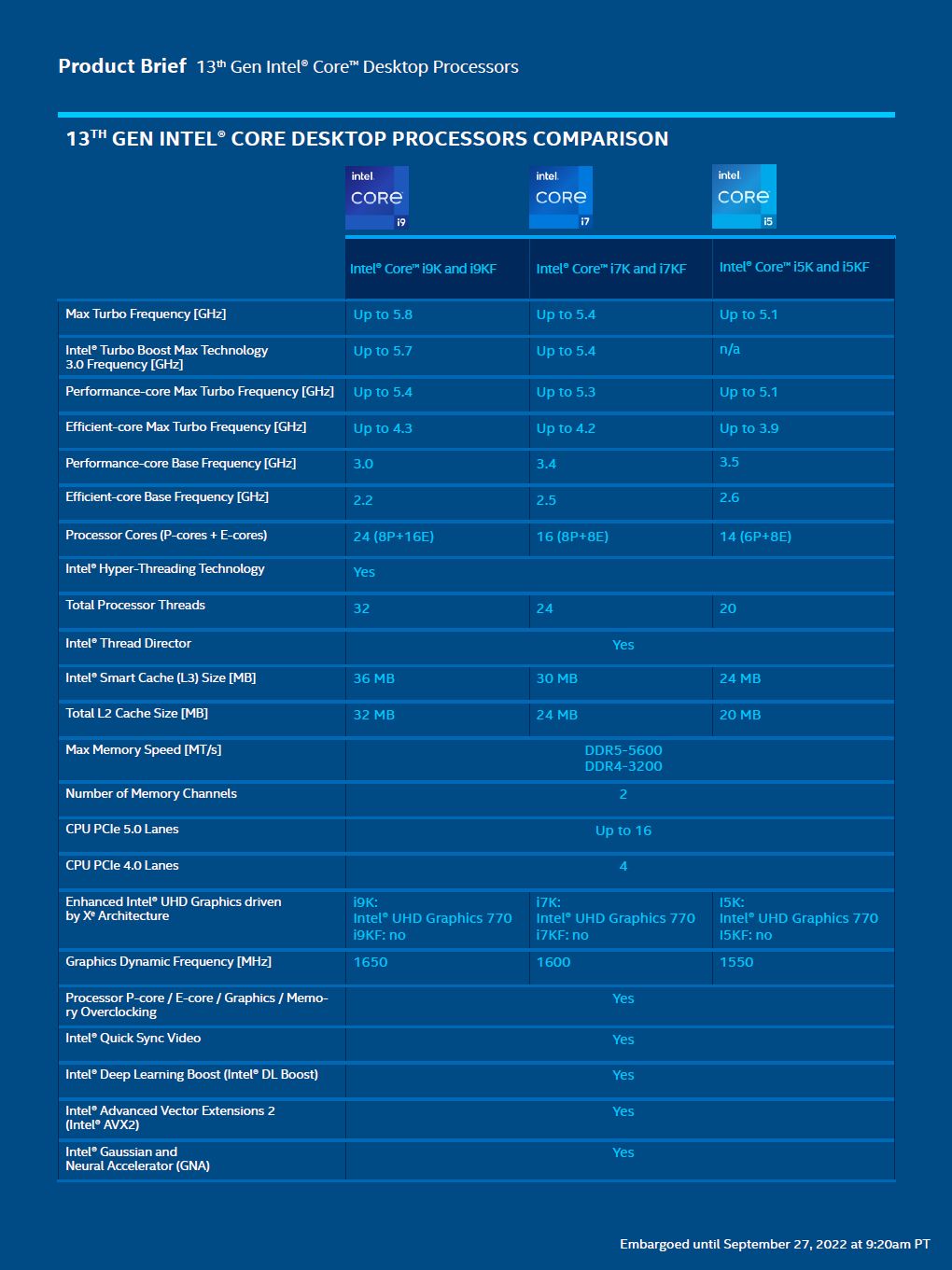