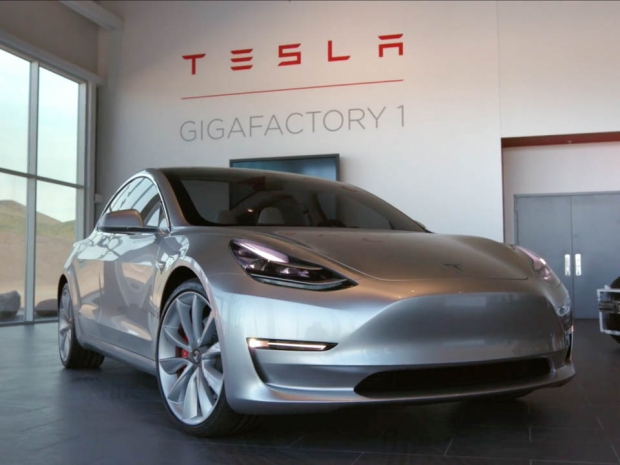 Will out-range the Chevy Bolt using a 75kWh battery

The CEO of Tesla and SpaceX took to Twitter over the weekend to tease us about what to expect on the pending production version of the mass market, all-electric Model 3 sedan that has audiences cautiously waiting in anticipation.

The Tesla Model 3 is the world’s first mass-market electric vehicle offered at a base price of $35,000 (€32,194) and will include a range of at least 215 miles, fully standard Autopilot, a larger optional battery and optional all-wheel drive.

In October 2016, Chevrolet debuted a similar vehicle called the Chevy Bolt, complete with a 238 mile range and $36,620.99 base price. While it does not come with standard Autopilot, both Tesla’s and Chevy’s latest mid-range electric vehicles are able to run from zero to 60mph in under six seconds and under seven seconds, respectively.

In Musk’s own words, the Model 3 is essentially a “smaller, more affordable version of Model S with less range, power, and fewer features”.

First and foremost on the list of new details is that the Model 3’s battery life will be limited to 75kWh due to the vehicle’s shorter wheelbase. The distance between the front and rear axles of the mid-size vehicle is an estimated 113 inches, while the Model S and Model X are 116.5 inches and 116.7 inches, respectively.

Although the original Model 3 announcements claimed that the vehicle would have “at least 215 miles” of range, Musk said that the vehicle is expected to have more range than the 238 mile Chevy Bolt. When accompanied with larger battery options, the range will obviously exceed this and become more in-line with the company’s higher-priced vehicle options.

Chevy has already beaten Tesla to the market by at least a year, as the first Model 3 production vehicles aren’t scheduled to be delivered to consumers until late 2017. But in terms of who gets first dibs on the initial production run of vehicles, the company says it will first sell a limited run of cars to employees, who will act as beta testers in the interests of getting the vehicle released to the general public even sooner.

The news is similar to Ford’s announcement last September that it would begin an employee only autonomous driving service to beta test the quality of its driverless vehicles on a short stretch of public roads in Dearborn, Michigan. Ford’s path to production is more long-term, however, as it intends to make the employee only autonomous service a middle step before its public implementation in 2021.

Perhaps one of the more puzzling announcements surrounding Tesla’s mid-size sedan is the confirmation from Musk that the all-wheel-drive option will not be released during launch, but will come as a later configuration sometime next year, several months down the road. The reason for this is because the company wants to “minimize configuration complexity” to keep the production ramp on schedule. 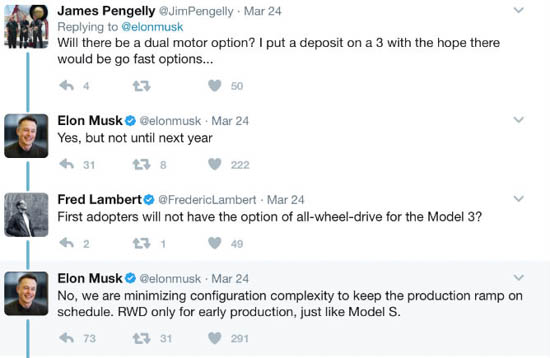 For Tesla, operational success is all about balancing the supply with timing, and if it can generate 375,000 pre-orders for a future vehicle, then it will need to focus all of its production efforts on fulfilling those orders on the release scheduled before the end of the year.

As some reports have previously mentioned, Tesla is not a company that has always followed its production deadlines. The Model X was delayed by three years and still had with quality control issues. Over the past five years, the company has failed to meet 20 of Musk’s projections and has currently missed about 10 goals by nearly a year on average.

Right-hand drive next summer, Performance option a year from now

Two of Musk’s more notable details when discussing Model 3 characteristics on Twitter were the implementation of a right-hand drive model for British, South African, Indian, East Asian, Australian and Japanese customers, and the possibility of Performance models after the initial release. When the first Model S vehicles were released just over four years ago, they all featured rear-wheel drive and standard left-hand drive. The right-hand option was released two years later in 2014, though Tesla says the wait will only be until next summer for the Model 3. 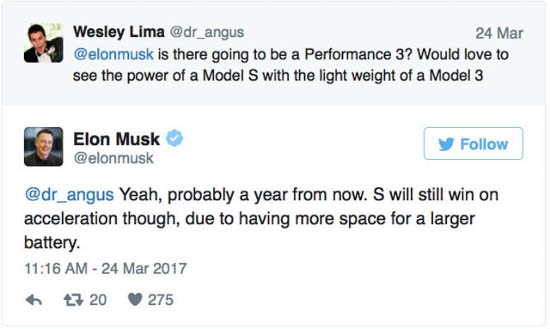 For Performance editions of the Model 3, Musk claimed these  should arrive in about “a year from now” as the company works to fulfill its initial production volumes to pre-order customers and early adopters between Q4 2017 and summer of 2018. As for acceleration, the Model S is still expected to win due to having more space for a larger battery. While this is no news, the Model 3 is at least confirmed to be competitive with the latest BMW 3 series and Audi A4, while the Model S is “more like the BMW 5 and 6 series, but much faster, more storage space and [includes] Autopilot features,” Musk reiterated.

The Model 3 has arguably become the biggest release for electric vehicles over the next several quarters. But whether Tesla’s Fremont factory can handle production demand has yet to be seen. As we wrote last month, the company has been re-engineering and expanding its operations at its Fremont factory, where it is currently installing manufacturing equipment. At Gigafactory 1 near Sparks, Nevada, it has begun production of battery cells for energy storage products which coincidentally have the same form-factor as the cells that will be used in the Model 3.

Last modified on 28 March 2017
Rate this item
(0 votes)
Tagged under
More in this category: « Industry ignores Samsung’s tough battery standard Chinese robot revolution has a few problems »
back to top