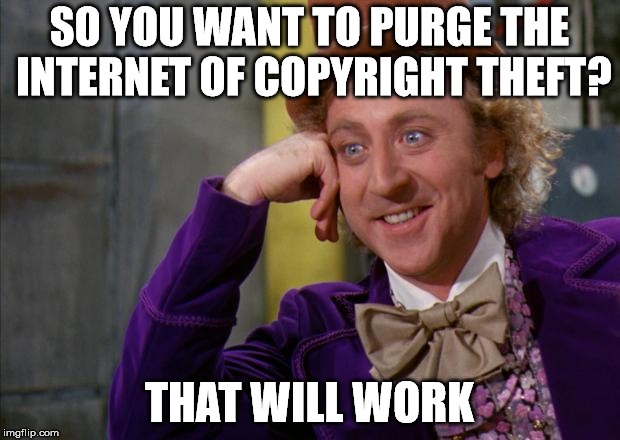 Things are getting daft

Fresh from bringing in the huge GPNR privacy legislation, the EU is presenting its sop to the entertainment industry in a move which could stuff up the internet in a big way.

The proposed regulation will force websites to filter out text, audio, photos and video shared by users against an ever expanding database of copyrighted works.

This means the internet mem, which is basically taking a picture and writing a funny caption, could be toast. In fact anything which someone adapts and hacks about to make something new could be a thing of the past.

Article 13 - as it’s known - is the EU’s stab at restructuring copyright law for the internet age in an effort to protect digital rights holders like record labels, photo agencies and film studios.

But privacy advocates warn the rules — which will be debated this month — violate the fundamental rights of internet users and could be used to excessively censor the web.

A campaign against the law says the proposals could “destroy the internet as we know it".

“Should Article 13 of the Copyright Directive be adopted, it will impose widespread censorship of all the content you share online”, it said.

The onus will be on the platforms that let users upload material - think social media, Wikipedia and video platforms like YouTube - to “prevent the availability” of protected works.

The non-profit The Electronic Frontier Foundation and 56 other rights organisations sent an open letter to European lawmakers in October highlighting their issues with Article 13.

“Article 13 appears to provoke such legal uncertainty that online services will have no other option than to monitor, filter and block EU citizens’ communications if they are to have any chance of staying in business”, it read.