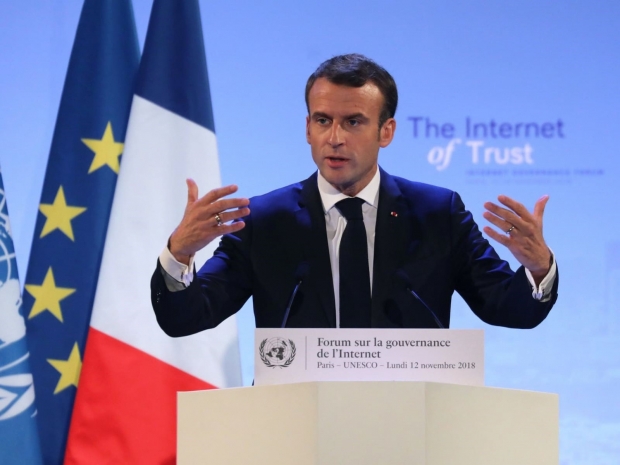 French President Emmanuel Macron is joining with US technology giants, including Microsoft,  pushing for governments and companies worldwide to sign up for a new initiative aimed at establishing regulations for the internet, to fight such online threats as cyber-attacks, hate speech and online censorship.

Dubbed the 'Paris call for trust and security in cyberspace', French President Emmanuel Macron is hoping to revive efforts to regulate cyberspace after the last round of United Nations negotiations failed in 2017. So far his deal has been supported by 50 countries.

The version he has come up with is supported by big tech and most European countries but, crucially, not China or Russia and so far indications are that Donald Trump will not agree either.

The signatories urge governments to beef up protections against cyber meddling in elections and prevent the theft of trade secrets.

The Paris call was initially pushed for by tech companies but was redrafted by French officials to include work done by UN experts in recent years.

The Trump administration is not keen on joining international initiatives which it sees as a clever bid to stop the US ruling the world. There would be a danger that a lot of Trump’s supporters might also be identified as creators of hate speech.

Russia handles a lot of the world's  internet trollage and China does not want to sign up for anything that stops it hacking western companies for technology, although both deny that is happening. There is an outside chance that Macron’s anti-censorship call might undermine the Great Firewall of China.

Last modified on 13 November 2018
Rate this item
(0 votes)
Tagged under
More in this category: « Big Content declares war on the Swiss Microsoft releases Windows 10 October 2018 update »
back to top