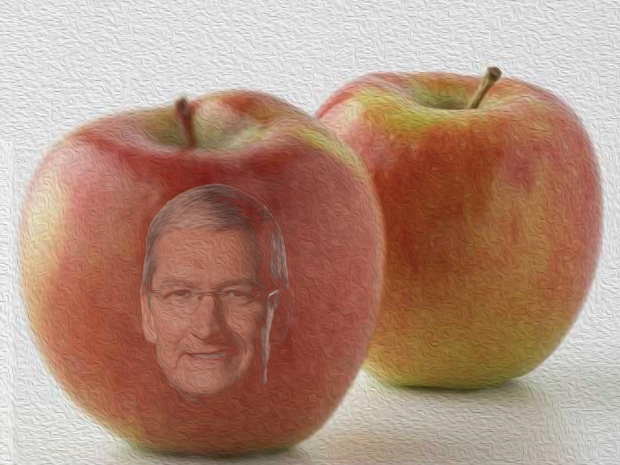 US president Donald (Prince of Orange) Trump seems to be having a spot of confusion about who is in charge of the fruity cargo cult Apple.

During a meeting with the Apple CEO and other members of his American Workforce Policy Advisory Board, Trump referred to Tim Cook as "Tim Apple" while praising him for investing in the US.

"We appreciate it very much, Tim Apple", Trump said.

As Trump would tell you he is “very, very, smart” and knows exactly what he is saying. So it is perfectly impossible for him to have made such a mistake by having a “brain fart” typical of many of a certain age.

What we think the great man has noticed is that Tim Cook has become such a company man he is slowly transforming into an outward manifestation of Apple. It is only a matter of time before Cook starts referring to himself in the third person and the company and personal idiom.

"We're going to open up the labor forces because we have to. We have so many companies coming in people like Tim, you're expanding all over and doing things that I really wanted you to right from the beginning.

"I used to say, 'Tim you've got to start doing it over here.' And you really have.

"I mean you've really put a big investment in our country, we appreciate it very much, Tim Apple. But we're opening it up. We have to bring people in. We want them to be people based on merit. And we want them to come in legally."

The tame Apple press and indeed the tame Trump press have done their best to play down the gaffe. One went on to a detailed explanation as to how Trump may have intended the words "Tim" and "Apple" to be separated by a comma, such that his comments were meant to express gratitude to both Tim Cook and Apple, in sequence.

However this is not the first time Trump has cocked up the name of a famous executive. Last month he called Lockheed Martin CEO Marillyn Hewson, "Marillyn Lockheed".

Cook used his time at the meeting to tout the importance of learning how to code software and Apple's efforts to help train students and other people on how to do that.

"We believe strongly that it should be a requirement in the United States for every kid to have coding before they graduate from K-12 and become somewhat proficient at it", Tim Apple said.

Cook has had a mixed relationship with the White House, participating in other meetings with Trump but also criticising the president's immigration policies.

Last modified on 07 March 2019
Rate this item
(0 votes)
Tagged under
More in this category: « Huawei confirms it thinks the USA is nuts European Parliament set to end EU-wide daylight saving »
back to top