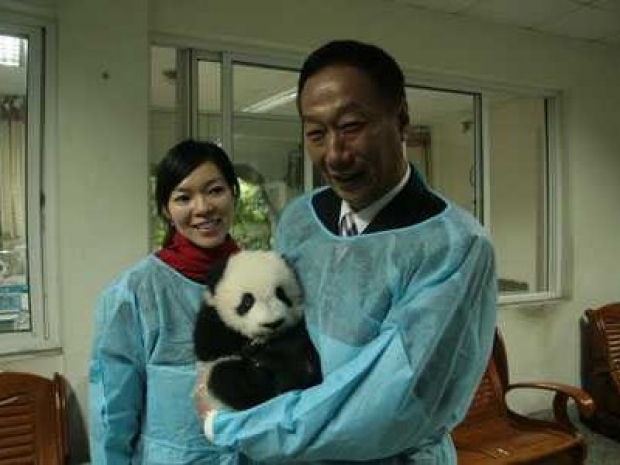 Wants to run a bigger zoo

The bloke who once described his staff as animals and himself as a head zoo-keeper thinks he has the political skills to become Taiwan’s president.

Foxconn’s Chairman Terry Gou he is considering whether to run for Taiwan’s 2020 presidential election, the day the tycoon announced plans to step down from the world’s largest contract manufacturer.

Speaking on the sidelines of an event in Taipei, Gou declined to say which party he could represent, although any bid could shake up the political playing field at a time of heightened tensions between the self-ruled island and Beijing.

If it was the opposition, China-friendly Kuomintang (KMT), he would “go” with the standard procedures of the party, Gou said, adding he would make that decision “as soon as possible”.

“I didn’t sleep last night ... 2020 is key for Taiwan. The reason for the tense situation (with China) is because it’s a turning point for Taiwan’s direction for politics, economy, defence for the next 20 years”, Gou said.

“So I asked myself the whole night ... I need to ask myself what I can do. What I can do for the youth? ... The next 20 years will decide their fate”, he said, his eyes welling up with tears at times.

The KMT said Gou had been a party member for more than 50 years and had given it an interest-free loan of T$45 million ($1.5 million) in 2016 under the name of his mother, a move that signalled his “loyalty” to the party.

The KMT did not immediately respond to a media enquiry on whether Gou was eligible to participate in the party’s already highly competitive primary election.

Gou is Taiwan’s richest person with a net worth of $7.6 billion according to Forbes. He told Reuters on Monday he planned to step down in the coming months to pave the way for younger talent to move up the company’s ranks.

The company later said Gou will remain chairman of Foxconn, though he plans to withdraw from daily operations.

Taiwan is gearing up for presidential elections in January at a time of heightened tensions across the Taiwan Strait, with Chinese bombers and warships conducting drills around the island on Monday.

Washington was likely to greet any presidential bid by Gou with caution. Mostly because he is seen as being a little too close to China. Although the US ended up with a President that was a little close to Russia.

“We need peace. We don’t need to buy too many weapons. Peace is the biggest weapon”, Gou said, adding that Taiwan only needs adequate self-defence. If we spend the money for weapons on economic development, on artificial intelligence, on investment in the United States, this would be the biggest assurance on peace.”

In 2012, at a company party held in Taipei Zoo, Gou described his employes as animals.

“Human beings are also animals and to manage one million animals gives me a headache", Gou was quoted as saying. It is not clear how managing 23.58 million will do to the 69 year-old’s head.

Last modified on 16 April 2019
Rate this item
(0 votes)
Tagged under
More in this category: « Microsoft joins Apple in dirty tricks campaign against Right to Repair AMD 50th Anniversary CPU and GPU spotted online »
back to top