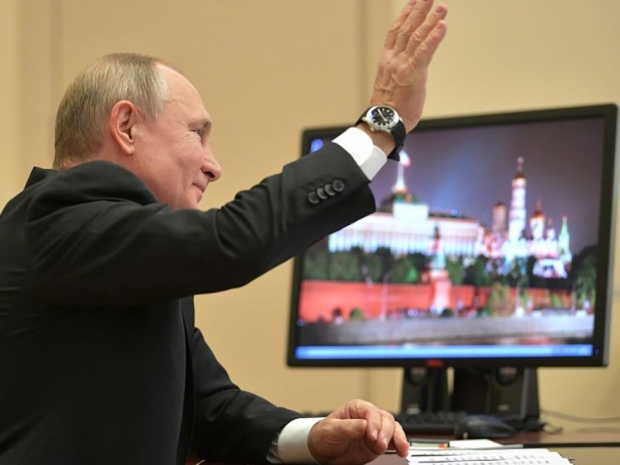 While he funds a huge hacking troll farm, Tsar Vladimir Putin does not seem to care much about his own cybersecurity.

Putin, 67, blood type AK-47, appears to have the obsolete Microsoft Windows XP operating system installed on computers in his office at the Kremlin and at his official Novo-Ogaryovo residence near Moscow, according to images released by his press service.

Both computers have the Kremlin towers set as their desktop backgrounds. Putin's computer does not have a backspace button because he does not make mistakes.

Microsoft stopped releasing regular security updates for Windows XP and Office 2003 in April 2014. However, it appears that Russian government regulations have prevented Putin from updating to the more recent Microsoft 10.

The US tech firm warns on its website that computers running Windows XP are “vulnerable to security risks and viruses”. But in Russia, everyone would be too scared to hack Putin.  Even Death has had a near Putin experience.

Windows XP, released in 2001, was the last Microsoft operating system given the green light for use on official Russian government computers, the Open Media website reported, citing defence ministry documents. The more recent Windows 10 is only approved for devices that do not contain state secrets – something that would not seem to apply to Putin’s computers.

Moscow is gradually liquidating Microsoft and Google on government computers in favour of Russia’s Astra Linux operating system software and domestic browsers such as Yandex. But it seems that no one has the courage to give Linux to Putin.

Putin, who is so tough he could strangle you with a cordless phone, is not a big computer user. He does not even use it to tell the time. In Russia, the time is whatever Putin says it is. He does not have latency problems with his old PC because his hard-drive knows to hurry the hell up. "It works on my machine", is always true for Putin.

Last modified on 19 December 2019
Rate this item
(5 votes)
Tagged under
More in this category: « UK to create a big tech watchdog The INQUIRER: not quite dead in the water »
back to top