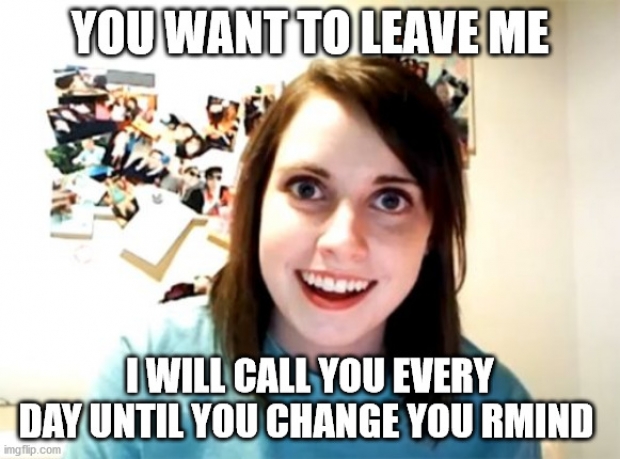 If you leave us, we will ring you every day for months

Sky in Italy is so desperate to keep customers it is losing that it has adopted a policy of harassing them like a neurotic ex-girlfriend who wants another chance.

It all started when we decided to cancel our contract. We noticed that we were only turning on Sky to watch terrestrial channels and it really was not worth the money.

We made a simple call and cancelled the contract about two months ago and it was all straight forward. Then the calls began.

For a while they were like clockwork – about the time we were eating dinner. But then they became more random. The latest was 10 am this morning. But they are every day.

Being British I listened politely to what they had to say before telling them “no, we are not interested”. But after a while I started to get miffed. It was clear that they were not listening and we just hung up when there was a gap in the call between answering and the sales person connecting.

But still the calls continued.

I started talking in English to make them go away (or in most cases hang up) but the novelty of that soon wore off.

I tried swearing in multiple languages telling them in no uncertain terms to go forth and multiply and that if there was a phone list to take me off it.  Next day there was another call.

A friend of ours is going through the same thing. Like many Italians they cancelled Sky when it stopped running high profile sports shows and have been hassled by call centres ever since.

It is bad enough that Vodaphone thinks it can ring every few days with a new offer, but it really is time that the government clamped down on these automatic calls.

The next stage is to write to Sky’s data controller and tell them to delete all references connected to us under the EU’s data protection laws, but that is a bit of an arse.

Nevertheless, the warning is never ever give your phone number to Sky.