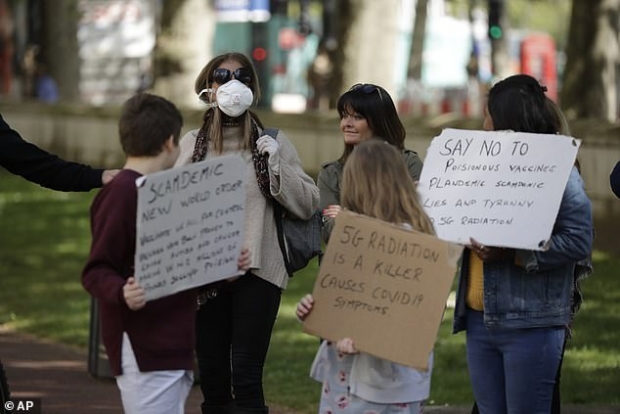 The UK is facing an “attack of the morons” with 77 arson attack on mobile phone masts across the United Kingdom and 180 incidents of abuse over the last month.

For those who came in late, Russian troll farms produced a wizard wheeze to allow their country to catch up on 5G and issued a “conspiracy theory” that 5G caused the coronavirus. No science was offered to prove it was possible, but then most people who believe the more recent conspiracy theories think the world is flat and that vaccines make you gay, autistic or communist.

But for some reason, the anti-5G conspiracy has taken off in the UK violently, in a manner which the English usually reserve for people who jump queues or fix their plumbing cheaply.

Wired reports that there have been 77 arson attack on mobile phone masts across the United Kingdom and 180 incidents of abuse. Openreach, the company that provides the upkeep of the British broadband infrastructure, reported 63 incidents of abuse against its staff over the last five weeks. The Guardian reports that one engineer had to flee a group of 15 people shouting abuse at him.

One Openreach engineer in north London, told The Guardian. “We are well equipped to deal with difficult customers. But since COVID-19, we have not experienced abuse like this before. Colleagues are leaving for work, thinking in the back of their mind, ‘Is it going to be a safe day today?’”

This engineer has been attacked three times, culminating in a threatening verbal abuse from a man who spat in his face. Subsequently, Michael had to self-isolate for two weeks after coming down with COVID-19 symptoms.

We reported how a a phone mast built to serve Birmingham's NHS Nightingale Hospital, created purposely to treat COVID-19 patients, was attacked on April 14.

Vodafone UK Chief Executive Nick Jeffery stated in a LinkedIn post: "It's heart-rending enough that families cannot be there at the bedside of loved ones who are critically ill. It's even more upsetting that even the small solace of a phone or video call may now be denied them because of the selfish actions of a few deluded conspiracy theorists."

The anti 5G movement is not particularly focused and seem to be convinced of a series of associations which include anti-vaccination, anti-lockdown and for some bizarre reason anti-Bill Gates. While none of these can be possibly true, the conspiracy nuts see a perfect storm of evidence which is all connected.

One group was spotted outside New Scotland Yard in Westminster, London, this afternoon, chanting 'hug someone, save lives', in defiance of the government's coronavirus lockdown laws.

Last modified on 11 May 2020
Rate this item
(0 votes)
Tagged under
More in this category: « O2 and Virgin Media confirm merger One robot deletes three human jobs »
back to top