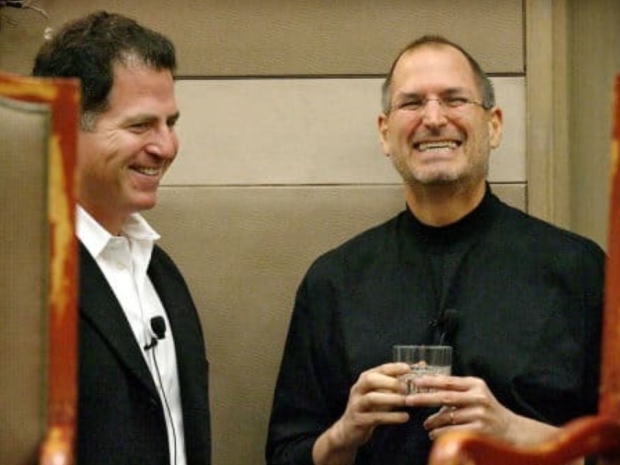 Tried to say it was better than Windows

Michael Dell has an amusing anecdote about Steve Jobs – the fruity cargo cult leader had a crack at telling him the Mac software was better than Windows.

Dell said that in 1993 after being kicked out of Apple for being an impossible bastard to work with, Jobs showed up at Dell and tried to convince him to license Mac software to run on Intel-based PCs.

Jobs started a new company called Next, and created an overpriced workstation with its own operating system and software called WebObjects for building web-based applications.

Dell said Jobs came to his house in Texas several times that year, trying to convince him to use the Next operating system on Dell PCs, by arguing that it was better than Microsoft’s Windows software and could undermine the Unix workstation market being touted by Sun Microsystems.

The problem, Dell says he told Jobs, was that there were no applications for it and zero customer interest. Still, Dell’s company worked a little bit with Next and used WebObjects to build its first online store in the mid-’90s.

In 1997, Jobs rejoined a struggling Apple after it acquired Next for $429 million, and he pitched Dell on another business proposal, as Jobs was evaluating Apple’s Mac clone licensing project, which he ultimately shut down.

Jobs and his team had ported the Mac software, based on Next’s Mach operating system, and ran it on the Intel x86 chips that powered Dell PCs. Next, jobs offered to license the Mac OS to Dell, telling him he could give PC buyers a choice of Apple’s software or Microsoft’s Windows OS installed on their machine.

“He said, look at this -- we’ve got this Dell desktop, and it’s running Mac OS”, Dell tells me. “Why don’t you license the Mac OS?”

Dell thought it was a great idea and told Jobs he’d pay a licensing fee for every PC sold with the Mac OS.

However,  Jobs was worried that licensing scheme might undermine Apple’s own Mac computer sales because Dell computers were cheaper to make and were generally better.

Instead, Dell says, Jobs suggested he load the Mac OS alongside Windows on every Dell PC and let customers decide which software to use -- and then pay Apple for every Dell PC sold. Jobs idea was to get a cut of every Dell ever made and make a fortune.

Dell smiles when he tells the story. “The royalty he was talking about would amount to hundreds of millions of dollars, and the math just didn’t work because most of our customers, especially larger business customers, didn’t want the Mac operating system”, he writes.

“Steve’s proposal would have been interesting if it was just us saying, “OK, we’ll pay you every time we use the Mac OS” -- but to pay him for every time we didn’t use it ... well, nice try, Steve!”

Another issue was that Jobs wouldn’t guarantee access to the Mac OS three, four or five years later “even on the same bad terms”. This would mean that Dell customers using Mac OS would be shafted because Dell would have no way to ensure it could support those users.

Dell said that if Jobs had not been such an arse, the deal was a what-could-have-been moment in history. Jobs could have continued to evolve the Next-inspired Mac OS and retooling the Mac product line, including adding the candy-coloured iMac in mid-1998.

It seems just as well for Jobs that he decided to nick the mobile phone idea. Otherwise, he would have been stuck as a niche seller of PC hardware to no one, even if he was touted as a “business genius”.

Last modified on 08 October 2021
Rate this item
(0 votes)
Tagged under
More in this category: « Intel moves into high RISC US Navy loses a Facebook page to hackers »
back to top