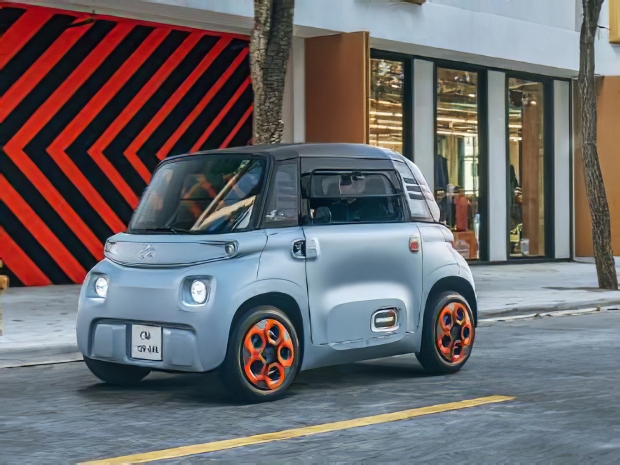 It is ugly and growls, but it is French, so what do you expect?

French automaker Citroën has taken the brave step of making an electric car which is affordable.

The Ami costs €6,000, it does not go fast, has a front which looks like it is growling at everyone, but it is French so that is appropriate.

The two-seat is being marketed as "non-conformist mobility object". It has a top speed of just 45 kilometres an hour. Which rules it out of use in Rome where a car which cannot reach warp-speed in the centre is considered silly, even if you can park it sideways next to the rubbish bins.

As one Italian driver put it “It is not a f*cking car it is a kid’s toy”.

The Ami powered by a six kilowatt, or eight horsepower, electric motor and can be driven by kids as young as 14 in France, or 16 in many other European countries, without a licence.

Under the laws of these countries, the Ami qualifies as a voiture sans permis (literally "car without licence"), or quadricycle, a category of small and slow vehicle that, for purposes of regulation, is treated like a four-wheeled scooter.

The Citroën Ami was designed with as few unique parts as possible. The front uses the same body parts as the back and even the doors are the same.

There's only a minimal gauge cluster. An app in the driver's smart phone, placed in a holder high in the centre of the dashboard acts like the central display screen in other cars showing things like driving range and navigation. There's also a cupholder behind the steering wheel.

It has a range of only about 70 kilometres, or 43 miles, per charge. On the plus side, though, it can be fully charged in only three hours using a household electrical outlet, which is better than many mobile phones.

Last year, Citroën celebrated its 100th anniversary at the Geneva Motor Show with the unveiling of the Ami One concept car, which was the precursor for this new production version.

Citroën executives explained at the time that the brand's strategy for tackling the electric vehicle market was not to start with expensive cars and work their way down in price, as Tesla has done, but to do the opposite: starting with cheap electric cars and moving up from there. Along with PSA's other brands, Citroën plans to make future car models available in electric, plug-in hybrid and pure internal combustion versions.

Citroën will begin accepting order for the Ami on March 30 in France and, a few months later, in Spain, Italy, Portugal, Belgium and Germany.

Last modified on 02 March 2020
Rate this item
(1 Vote)
Tagged under
More in this category: « Hybrid multirotor breaks the barrier in flight time Rocket Lab is authorised for more important missions »
back to top