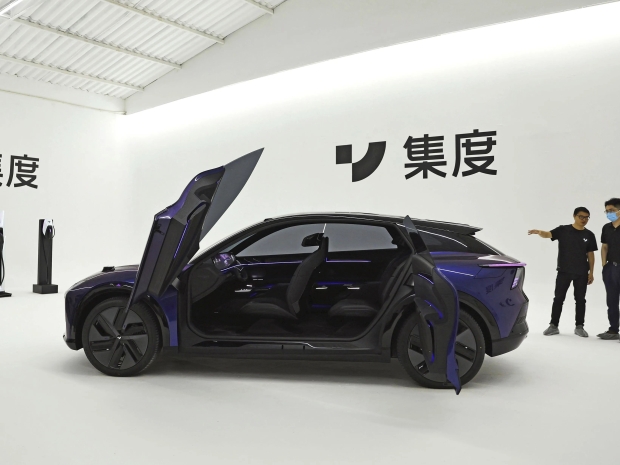 It has two lidars, a 5-millimetre-range radar, 12 ultrasonic sensors, and 12 high-definition cameras and AI-assisted voice recognition, with voice response speeds within 700 milliseconds, based around its Qualcomm Snapdragon 8295 chip.

Jidu has done its best to market the car as a robot rather than just a vehicle. Company CEO Joe Xia believes the car will become the standard for self-driving cars. Which we really hope does not come back to bite him.

It is unclear how autonomous the car will really be. In January 2022 Baidu and Jidu said the car would have Level 4 autonomous driving capability, which does not require a human driver.

The press release made no mention of Level 4, saying only that the car offered "high-level autonomous driving. "

In September 2022, Baidu cofounder and CEO Robin Li noted that lower levels of autonomy shield car companies from liability in the event of a crash because the driver is expected to be in control. With Level 4, the manufacturer of the car or the operator of the "robotaxi" service using the car would be to blame.

Chinese regulations do allow Level 4 in robotaxis that operate within designated geofenced areas, and Apollo has already shown what it can do in Baidu's Apollo Go robotaxis, which have delivered more than 1 million rides in at least 10 cities across China.

Baidu recently unveiled its latest autonomous robotaxi, the Level-4 Apollo RT6, which has a detachable steering wheel. The absence of a steering wheel is a “statement”, and it frees up cabin space for extra seating or even desktops, gaming consoles, and vending machines.

"Theoretically, the half-moon of a steering wheel can fold up, paving the way for a cockpit seat with no window obstructions, once full self-driving is allowed on China's roads."

Last modified on 05 December 2022
Rate this item
(3 votes)
Tagged under
More in this category: « I've got a brand new robot harvester and I'll give you the key Mass sodium-ion battery released »
back to top