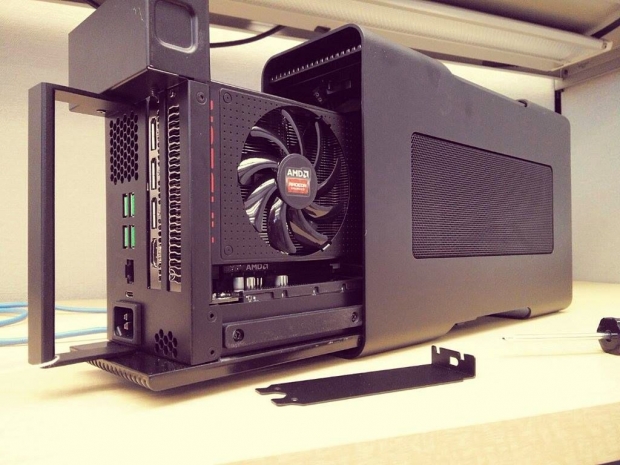 It appears that AMD is quite impressed with external GPUs showcased at CES 2016 show in January and might push to standardize the technology once again.

While this is certainly not AMD's first shot at external graphics solution, as we already chance to see it back in 2008 when AMD tried to pitch the idea of an external graphics solution, codenamed Lasso, and it actually showed up as the FSC Amilo Graphics Booster, sold in a bundle with certain FSC Amilo series notebooks. Unfortunately, it was based on proprietary ATI XGP connector and never actually kicked off.

Today, when Thunderbolt 3 interface is enough to drive such a external graphics solution, AMD apparently plans to push that idea again as, according to a Facebook post from Robert Hallock, Head of Global Technical Marketing at AMD, there are plenty of users looking to have a single ultrathin notebook that can be used as a gaming system when connected to an external GPU.

Bear in mind that the the Thunderbolt 3 interface, described as "the USB-C that does it all", is developed by Intel, which will be quite interesting for AMD. The Thunderbolt 3 also doubles the bandwidth of Thunderbolt 2, reaching 40Gbps (5GB/s) and can simultaneously drive two external 4K displays at 60Hz and supports PCI-Express 3.0 and other protocols as well as HDMI 2.0 and DisplayPort 1.2.

There were quite a lot external GPU solutions showcased at CES 2016 in January including Razer's Core, which was pictured with an AMD Radeon graphics card on Hallock's post, MSI's Gaming Dock and Alienware's Graphics Amplifier, which already sells for US $299.99 and promises to "transform your Alienware 13, 15 and 17 R2 notebook" into a full gaming desktop system. Alienware's Graphics Amplifier supports dual-slot graphics cards (GTX 600/HD 5000 or newer) with a TDP of up to 375W.

Hallock also promised in its post that we will get more info soon so we might see some sort of "reference" external GPU enclosure from AMD during GDC 2016 show which is scheduled to start on March 14.

Rate this item
(9 votes)
Tagged under
More in this category: « AMD dual-GPU Fury X2 could be air-cooled AMD rolls out new Radeon Software 16.2.1 Beta driver »
back to top