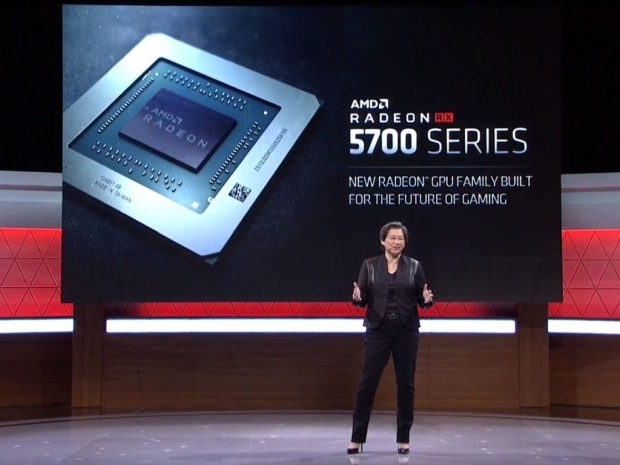 The Navi paper-launched when I was still in sunny Tuscany taking a break from the tech, but here are some of the things that have caught my attention. No Ray tracing, no high end, and only performance/mainstream, not much benefit from 7nm, and nine months late to fight 2070 are just a part of it.

Most AMD friendly press didn’t point out there were a few elephants in the room. AMD is comparing its card that is about to ship on July 7 (still in the future)  versus 2070 card that has been out for three quarters. It would not be much of an effort to release the 2070 updated version which can easily beat AMD’s 5700 Navi next-gen card. Nvidia is working on Ampere that will be a 7nm and possibly stir the pot.

The Geforce 2080, 2080 TI and Titan RTX remain the kings and Navi cannot touch it. Bear in mind that we repeatedly told you that Navi is a mainstream a Radeon 5000 series replacement rather than a high-end card. A Navi based high end might be coming at a later date.

Navi has No Ray tracing

Microsoft has announced that the Xbox 2020 will have a Navi RDNA based Ray tracing support. The 2020 second generation Navi is the chip worth  gamers' attention as it is clear that from late 2018 all the game studios are developing the future AAA titles for Ray tracing. Ray tracing will shape how gaming in the future will look.

So getting a card today for $379, $449 or $499 for special Lisa Su 5700 XT is a short sighted investment. It will play most games well, it will play Counter-Strike at 500 frames per second for sure, but for the existing and upcoming eighteen Ray tracing titles, it won't do a thing. Traditionally these prices won't hold, they will go down very quickly as this is what AMD did every single time Nvidia put price pressure on its products.

The Console and PC guys are well aware of it. There is another market with a high growth potential - the streaming market and Geforce Now and Google Stadia with that will later get boosted by 5G, but that's is another story altogether.

AMD is downplaying Ray tracking as it doesn’t have it. The same thing happened with the shaders, where the company which is better with a pixel or vertex shader will promote that loudly until they all became unified. Nvidia was the first to make a Ray tracing product to market and AMD will be two generations behind. Even Intel’s next generation 2020 GPU will have Ray tracing support.

AMD plays the PCIe 4.0 card but this is something that will help in any meaningful way. It was funny to see that the New PCIe 4.0 test is coming to 3DMark, and it is obvious who benefits from that benchmark. There will be a need for more PCIe bandwitdh but this is not in 2019 but AMD will try to convince your otherwise. The company has a new chipset and CPU that they need to sell.

The fact that Navi is significantly smaller and still has 10B+ transistors might sound better than it is. The 7nm new chip is not a disadvantage for end users as they will get decent performance at a very good price. The 7nm wafers are very expensive, and companies like Apple and Qualcomm can make decent money off them, as they sell them in high volumes. There is always a question of yield, and high-density chips are hard to make, especially in the new manufacturing process.

Nvidia will likely decrease its pricing having a nine month advantage, and it is not clear if AMD has the capacity to build enough of the RDNA Navi based 7nm parts. There is a rumor that Samsung is manufacturing some of the future Nvidia parts in 7nm. We did report more than a year ago that after Turing comes to Ampere and that after 12nm it is most likely that 7nm is the next step for Nvidia high-performance GPUs.

Navi is a decent price performance part, and it will do one thing nicely. It will put pressure on Nvidia, and the final result will be more competitive pricing and better products. That is why competition is extremely important. It hasn’t been since NV30 Geforce FX in 2003 that Nvidia lost to AMD, keep that in mind. We have been following the  graphics market even before that.

In the end, AMD Navi 5700 delivers what it does best, second-grade products, cheaper than the main competitor, and lacking a 2019/2020 future proof feature called Ray tracing.