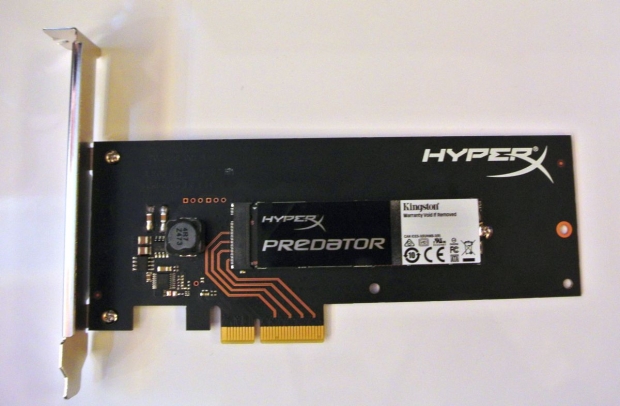 Back in January at CES 2015, we had a chance to see Kingston's HyperX Predator PCIe SSD line and company representatives promised that we should see products in retail by February.

It took a bit longer than expected, but Kingston has now started shipping its high performance SSD drives powered by the Marvell 88SS9293 controller. The Predator PCIe SSD can reach impressive speeds of 1400MB/s read and 1000MB/s, write which is significantly faster than your average SATA 3 SSD.

The drive comes in both 240GB, 480GB capacities and ships with an optional half-height, half-length (HHHL) adapter that will let you plug the drive in the motherboard without an M.2 PCIe slot. You will be able to plug the M.2 drive directly into M.2 PCIe sockets on a modern motherboard that supports this standard. The M.2 PCIe 4x is faster than the traditional M.2 SATA standard and this is one of the reasons why the HyperX Predator PCIe can reach such a high speeds.

This leap in performance will cost you €291 for the 240GB drive with HHHL bracket, while the first listing of the 480GB drive indicates a price of €523,84.

Since this will be one of the fastest storage solutions around, you cannot really complain about the premium price, as it is bound to end up in very fast and expensive systems. On another note, the company's HyperX brand is committed to eSports as it sponsors over 20 teams globally, and is the main sponsor of Intel Extreme Masters.

Last modified on 24 March 2015
Rate this item
(3 votes)
Tagged under
More in this category: « Samsung wants to stick 128GB of storage on mainstream phones OCZ announces Vector 180 SSD »
back to top