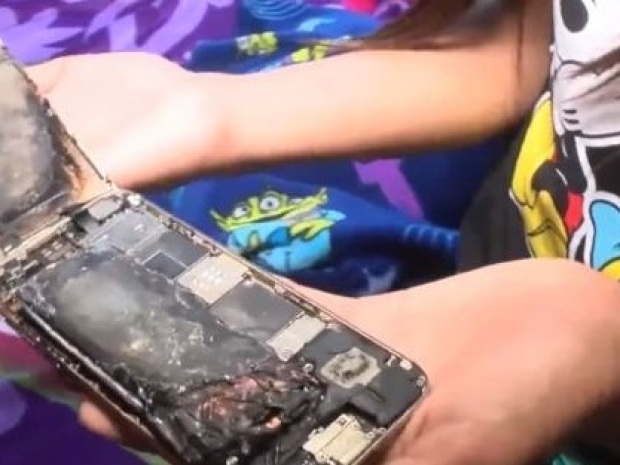 Apple quickly investigates without saying she was holding it wrong

An 11-year-old girl’s quick thinking saved her when her iPhone caught fire while she was playing with it at her home in California.

Kayla Ramos was in her sisters’ bedroom when she saw sparks flying from the gadget and threw it across the room.

“I was sitting down, and I had my phone in my hand and then I saw sparks flying everywhere and I just threw it on a blanket.”

Most 11 year-olds with an iPhone would have continued to hold the phone while waiting to see what new feature Apple had given them. While that might have saved her from third degree burns the iPhone was not done and burnt its way through the blanket.

She told ABC News in Bakersfield, California: “I was right here on the bed and the phone managed to burn through this blanket and make these holes.”

The Tame Apple Press has done its best to play down the incident. In its reports it has inserted lots of words like “she claimed” and doing its best to say “she is a lying naughty girl who will not be visited by Santa for all the nasty things she said about the iPhone”.

Other than that the standard line is: “this isn’t the first time an iPhone has caught fire but the incidents are isolated. Samsung, meanwhile, had to recall all its Galaxy Note 7 handsets in 2016 because a battery fault caused many to explode.”

What is more alarming in this case is that normally Apple can blame faulty or non-compliant phone chargers for the issue.

In this case Apple, perhaps sensing a PR failure in the wind, said it will send out a replacement iPhone for the one that caught fire and is investigating.

Kayla said that she used her iPhone mostly for watching YouTube videos and would occasionally let her siblings play with it. Kayla’s mum, Maria Adata, said she called Apple the next day to tell the company what had happened. She was told to send pictures of the device to customer support and to send the damaged unit back to the tech giant. Maria said: “My child could have been caught on fire and she could have been hurt more and I am glad she’s okay.”

More in this category: « "Agent Smith" malware downloaded to 25 million Android devices Snapdragon 855 Plus announced »
back to top