Apple A13 has 8.5 billion transistors 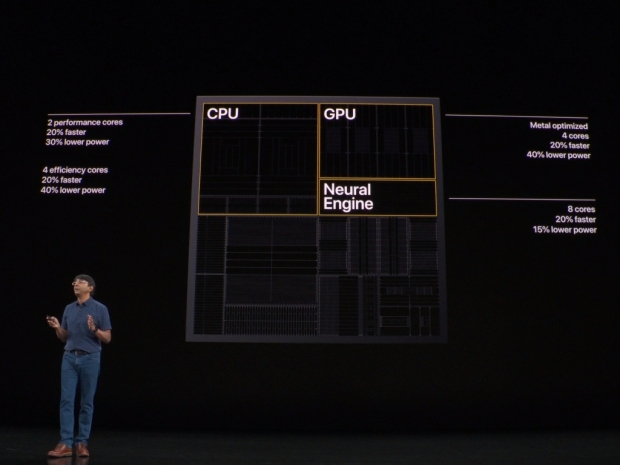 Apple A13 Bionic is at the heart of iPhone 11, the new iPhone XR colorful successor, as well as flagship iPhone 11 Pro and iPhone 11 Pro Max described in detail at these links.

Apple spent unusually little time disclosing things about the SoC but here are the few key specs. It did mention that the SoC comes with six CPU cores, two performance, and four efficiency cores. They are all ARM-based and custom Apple design. According to Sri Santhanam, VP of silicon engineering, performance cores are 20 percent faster with 30 percent lower power while the four efficiency cores are 20 percent faster with forty percent lower power compared to the A12 first-generation 7nm SoC from the iPhone Xs.

Sri is talking about a large number of different blocks in the SoC that can be turned on and off very fast as well as clocked at the right level. These architectural changes should contribute a lot to power saving in the A13 but honestly, this is nothing that we haven’t seen before in the SoC. Maybe we are missing some more information.

GPU is optimized for Metal API, and Apple has been pushing this to its loyal developers. The GPU has four cores on a new microarchitecture, and it is 20 percent faster than the previous generation. At the same time, Apple claims 40 percent power reduction.

The neural engine comes with eight cores and again brings 20 percent faster performance and 15 percent lower power. Unlike most media reported, the A13 lead was still Gerard Williams III.

He lead the design on A13 before he left the company earlier this year. A13 was well developed and locked down in early 2019 when he departed.

Let’s come back to the average 20 percent constant vector for a second. Without Apple announcing, it becomes clear that CPU, GPU, and neural engines are based on an improved architecture in 7nm and a significant part comes from the maturity in the 2nd generation manufacturing process. Without Apple confirming it, this sounds like TSMC’s N7P process.

Apple claims six times faster matrix multiplications that will come very handy in machine learning tasks. Apple claims one trillion operations per second between CPU, GPU and Neural engine and this translates to 1 TOPS for readers who follow the AI / ML terminology.

GPU compared to the competition

Apple’s marketing embarrassed themselves, showing the CPU and GPU performance charts without any actual data. They show the charts without any numbers that leave a lot to the imagination. It looks good, and it looks like A13 Bionic is substantially faster than the iPhone XR A12 Bionic, the one that comes with a lower clocked GPU. If it compared it versus Xs, the performance lead would be less.

We don’t know the benchmark, but you can suspect that this is one of the game/benchmark that makes Apple's in house GPU shine.

Apple is using its neural network and CPU, GPU, and Neural Engine to get better night picture quality. In late 2019 and dawn of 2020, the market is all about computation photography. Google Pixel 3 set quite high standards with Snapdragon 845 computation night mode photo. Soon the new Pixel 4 with Snapdragon 855 will give even better results. Huawei P30 Pro with Kirin 980 makes some of the best pictures around, and the triple camera is not something that Apple did first either. Apple is rarely first to adopt new technologies including faster charging and 5G, but it manages to get by. Apple is well aware that its users are stuck in the vertical system and they don’t even consider things until they show up on Android. Doing multiple camera lenses was long overdue, as one needs more than one lens, no matter how good the camera or photographer.

Apple’s A13 will do a great job with HDR video, and 4K 60 FPS doesn’t seem that big of a deal in late 2019, but Apple concentrates on quality.

When it comes to iPhone CPU and GPU performance, it seems to thrive there as it makes one chip that fits all its needs and it doesn't have to cater the same chip to 100s of customers like one of its competition Qualcomm Snapdragon.

The 8.5 billion transistors sound small compared to Kirin 990 5G with 10.3 billion, but Huawei has 4G and 5G modem integrated into the SoC. 5G modem would take a lot of space while Apple is still stuck with two chip design and an external modem for a while. Huawei didn’t give us the number how big is the Kirin 990 4G, but our best guess is that it would be very close to Apple’s 8.5 billion. Apple’s first-generation 7nm A12 Bionic was a 6.9 billion transistors SoC.

Last modified on 11 September 2019
Rate this item
(0 votes)
Tagged under
More in this category: « Asia gives iPhone the thumbs down Apple also offers a new entry-level iPad »
back to top