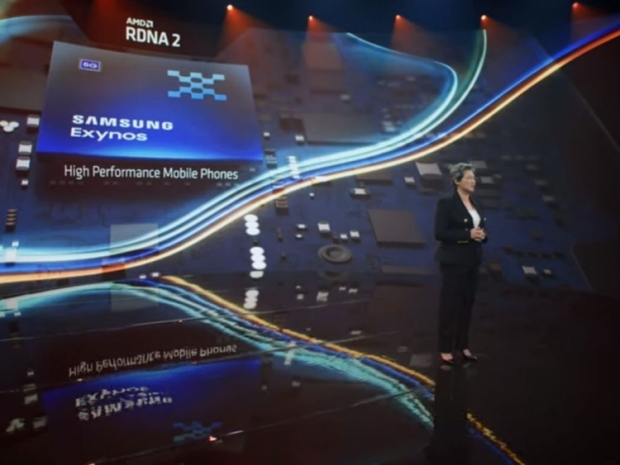 It appears that the earlier reports from Korea were spot on as the latest rumor suggests that the Samsung Exynos SoC with AMD RDNA2 GPU could be launching in July. A different report also suggests it could be packing quite a punch, despite being limited in order to fit the power envelope.

The earlier report from The Korea Economic Daily suggested that we could see Samsung Exynos SoC with a custom GPU based on AMD's RDNA architecture will launch this year, but the latest one, suggests it will be announced as early as next month. Earlier rumors pointed that such a chip could be based on Samsung's 5nm 5LPE manufacturing process and might be similar to Exynos 2100, but feature higher clocked Cortex X1 cores.

AMD's CEO, Dr. Lisa Su, already confirmed during the Computex keynote that such GPU will be coming to Samsung's next flagship SoC, and support both raytracing and variable-rate shading.

The latest report from Ice Universe on Twitter, suggest that such SoC was originally scheduled to be announced in June but has been postponed to July, so hopefully, we should not wait too long to see some details as well as get an idea about the actual performance and set of features that such GPU will bring.

Exclusive：Samsung×AMD GPU was originally scheduled to be released in June, but now it has been postponed to July, when we will know the performance of AMD GPU on Exynos and other details. pic.twitter.com/GM6W8l3EKY

Another report, coming from Korea and picked up by ThePhoneTalks.com, suggest that the performance of such mRDNA GPU is impressive and although the frequency is limited and the frequency is reduced by 30 percent, the same GPU is faster than current or even the next generation Mali GPU, at least according to internal testing.

ARM has already promised that the next-generation Mali-G710 GPU will bring 20 percent improvement compared to the current high-end Mali GPU, the Mali-G78.

Hopefully, we'll hear more officially from Samsung and see this GPU in action by the end of this year as that same SoC is rumored to power phones as well as laptops.

Last modified on 21 June 2021
Rate this item
(3 votes)
Tagged under
More in this category: « Mobvoi rolls out TicWatch E3 smartwatch Apple tries to spread rumours that scammers will infect iPhones »
back to top