Samsung to overtake Apple in smartphone shipments this year

Apple in second, HTC in third

DigiTimes has just released its comprehensive Global Smartphone Industry 2012 forecast report, which entails the total number of global smartphone shipments in 2011 along with estimates of smartphone manufacturer ranking by volume in 2012.

According to the report, global smartphone shipments are projected to top 464 million units in the entirety of 2011, with Apple being the top ranking vendor in terms of shipment volume, followed by Samsung Electronics and Nokia. On the Google Android side of matters, it is expected that Samsung will overtake Apple in 2012 as the "world's largest smartphone vendor by volume." In addition, HTC will overtake Nokia for the third-place spot. 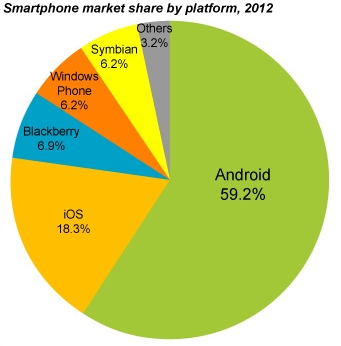 In terms of operating systems, Google Android OS marketshare is expected to reach 59.2-percent in 2012, while iOS will stay almost flat at 18.3-percent. RIMs BlackBerry OS will marketshare will decline significantly at 6.9-percent, while Microsoft's Windows Phone OS will reach 6.2-percent. Finally, Nokia is expected to hold a steady 6.2-percent with its low-priced Symbian devices catering towards the budget market.

Last modified on 26 January 2012
Rate this item
(0 votes)
Tagged under
More in this category: « Rasberry Pi outperforms Tegra 2 HTC to reduce smartphone lineup size for 2012 »
back to top