Vatican snuggles up with Silicon Valley 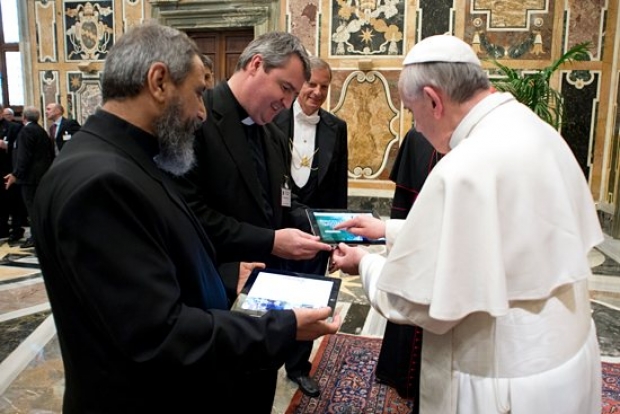 The Roman Catholic church, which has just got used to the idea that the earth goes around the sun, is turning to Silicon Valley to help make its homophobic, misogynistic, contraception hating, protectors of kiddie fiddlers relevant for the 21st century.

This week the Church ran a hackathon blessed by Pope Francis and the temporal authorities of Google and Microsoft. VHacks, a three day event, welcomed 120 students of different faiths from 60 universities around the world. For the students, the hackathon was a chance to brainstorm new ways of responding to issues that concern the Pope: the treatment of migrants and refugees, social inclusion, and interfaith dialogue.

The Vatican told the press that it was a way to send a message that there’s a place for innovation even in an ancient Church.

According to the Atlantic, under Pope Francis, the Catholic Church has been courting Silicon Valley, and it is finally getting a nibble with priests, and entrepreneurs say a relationship between their two realms, disparate as they are, can be mutually beneficial.

Brian Green, a Catholic professor who focuses on technology ethics at Santa Clara University, was quoted as saying that the Church has been positive toward technology in the past.  But as humans have become more powerful, the Church has felt like it has to say "no to more things” which gives some the impression that the institution is technologically retrograde.

At the hackathon, Michael Czerny, a Jesuit priest and undersecretary of migrants and refugees in a new Vatican department for promoting human development, said Pope Francis is starting to rectify the Church’s image problem in Silicon Valley. “The owners or controllers of technology would usually not notice the Church”, Czerny said. “Thanks to Pope Francis, they do.”

The pope met Eric Schmidt, then the executive chairman of Google’s parent company, Alphabet, at the Vatican in January 2016. He met Facebook founder Mark Zuckerberg later that year. Then, in December 2017, the Vatican served as a venue for a tech competition among startups trying to address climate change.

However, some of this is spin. The 81-year-old pontiff has admitted he doesn’t know how to use a computer and has at times come out with some truly out of touch statements including one where he claimed that social media did not exist and the Internet was a "gift from God." The Vatican runs his Twitter account and has clocked up well over 40 million Twitter followers.

Of course, that is all very well, but if you want to reach kids, you have to stop peddling a moral code which has been out-of-date since the age of enlightenment.

Last modified on 23 March 2018
Rate this item
(0 votes)
Tagged under
More in this category: « Android to get 3D face recognition US tech heads to China »
back to top