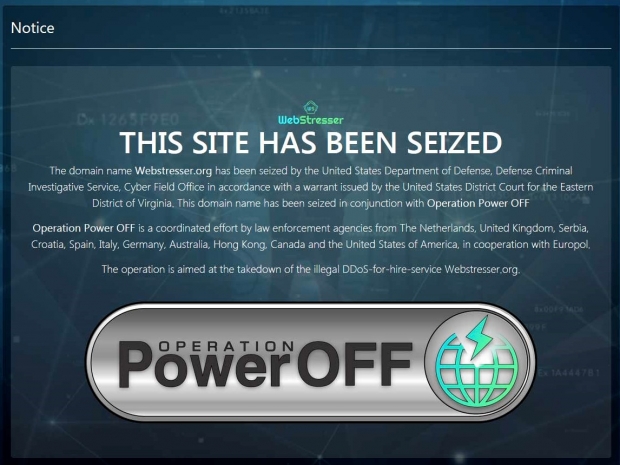 Europol officials have shut down WebStresser where users could register and launch DDoS attacks after paying for a monthly plan which started from 15 euro.

The website considered the largest DDoS-for-hire service online, had over 136,000 users at the time it was shut down. Europol said it had been responsible for over four million DDoS attacks.

Visitors to the website will now see a notice stating that the site has been seized in conjunction with "Operation Power Off", which is the name of the multi-country operation that took down the site.

Besides shutting down the website's server infrastructure, authorities said they also arrested the site's administrators, located in the United Kingdom, Croatia, Canada, and Serbia.

Dutch and UK cops led the investigation and were responsible for tracking down administrators and their infrastructure.

WebStresser's server infrastructure located in the Netherlands, the US and Germany was also shut down.

Europol added that "further measures" were taken against the site's top users, who've launched the most attacks in recent years. Officials didn't reveal what these measures were but merely said the users were located in the Holland, Italy, Spain, Croatia, the United Kingdom, Australia, Canada and Hong Kong.

It has taken a long time to kill the site. WebStresser launched in 2015, according to a source in the DDoS mitigation industry. It was initially a small-time service, but it evolved over the years.

The service became extremely popular in recent years, and is the first result returned on Google when searching for terms like "DDoS booter" or "DDoS stresser."