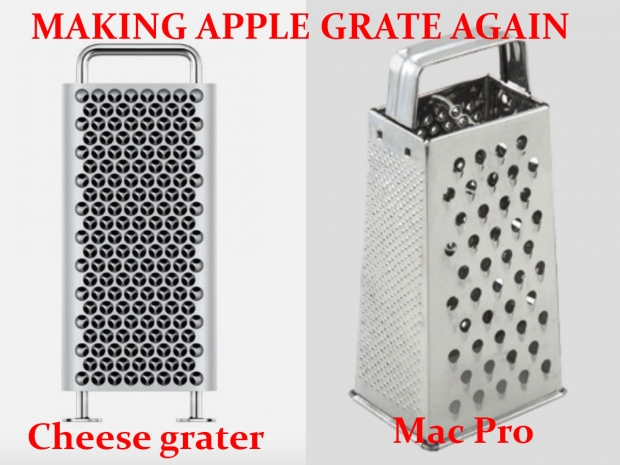 Design is something for other people

The fruity cargo cult Apple, which used to be known for its design over substance, has come up with a new Mac Pro design which looks like a cheese grater.

To be fair the Mac Pro design always fitted into “what was Apple smoking when it came up with it?”

The old version looked like a rubbish bin inhabited by a grumpy Sesame Street character and clearly thought it was time to move into designs inspired by everyday kitchenware.

Apple felt there was more mileage to be gained by moving into kitchen products.

It is not as if Apple has not had time to come up with a decent design. It is the first Mac Pro to be designed since 2013.

The machine is pricey and starts at $5,999 for a laughable spec that includes an eight-core Intel Xeon processor, 32GB of 2666MHz memory, a 256GB SSD, and AMD Radeon Pro 580X graphics.

Its housing is largely made of aluminum, with stainless steel handles for moving the device as needed as well as a set of "feet" on the bottom. It can be configured with a small set of wheels for easier transport, too.

Apple says both sides of the device are openable for user access. The whole thing measures about 21 inches tall and 8.5 inches wide.

Apple is touting the new Mac Pro as "the most powerful Mac [it] has ever created". Which is not really saying much. At least it is honest enough not to say it is the most powerful computer. For the same price you could get a serious system.

The company says it is using a "brand new" Intel Xeon W processor with up to 28 cores and can use six-channel 2933MHz ECC memory with 12 DIMM slots. The device is configurable with up to 1.5TB of system memory and up to 4TB of SSD storage. It can put out more than 300 watts of power and comes with a large heat sink for cooling that Apple says will allow the device to "run fully unconstrained all the time".

God knows though how much installing decent memory and SSD will cost you.

For graphics, the new Mac Pro starts with the Radeon Pro 580X but can be configured with AMD's new Radeon Pro Vega II, which Apple says carries 14 teraflops of compute performance and 32GB of memory with 1TB/s of memory bandwidth. A model with a Radeon Pro Vega II Duo GPU, which doubles that performance, will also be available, as will a configuration that includes two of those Vega II Duo GPUs. That means the machine can max out with four GPUs, 56 teraflops of graphics performance, and 128GB of HBM2 graphics memory. That's a lot!

The company is promoting video editing performance with a new video card called "Afterburner." Apparently, the name is nothing to do with Apple’s ancient ability of its IIcs to catch fire. Apple claims can decode more than six billion pixels per second. The company says this can allow the new Mac Pro to play back up to 12 streams of 4K ProRes RAW video or up to three streams of 8K video in real time.

The system runs on a 1.4kW power supply, which is, again, a ton. But behind its aluminum grill are three large fans at the front of the device. There is a blower as well, though Apple claims the device won't be any louder than an iMac Pro when it's up and running. Again not necessarily a good thing. My brother-in-law's old Pro sounds like a 737 making a surprise dive.

Last modified on 04 June 2019
Rate this item
(0 votes)
Tagged under
More in this category: « Apple finally invents the thumb drive Apple surpases itself for pricing stupidity »
back to top