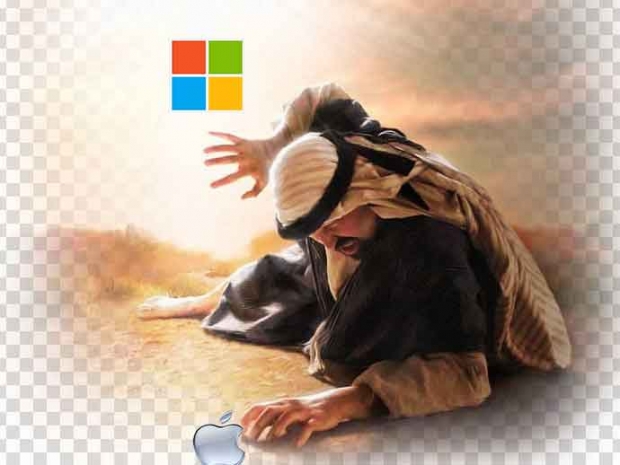 Converting them to the proper technology

The Tame Apple Press is furious after discovering that that software king of the world Microsoft has taken the missionary position on converting Apple fanboys to proper technology.

Columnist Chris Matyszczyk warned that the mix of cash and technology was proving a winning combination to which Apple does not have an answer, but gives fanboys an example about how to repel those evil Vole salesmen with their appeals to logic.

"A Microsoft store salesman enlightened me. It was spiritual, as much as factual", he wrote.

Apple fanboys are not aware of how much the non-Apple world has moved on, and you can get much better tech for much less cash.

"Now you can have a terabyte, which means this phone improves your mobility and can now replace your laptop. You can now run your business straight from this phone," he said... With a fervent -- and, I have to say, elegant -- enthusiasm, he talked me through my new possibilities. The ability to have everything from Outlook to Word to Excel to One Drive existing simultaneously on every gadget was, apparently, my new Nirvana. He took me over to a desktop and showed me how to dock my new Samsung phone and work simultaneously on the phone and the desktop", Matyszczyk  wrote.

"He then led me to the Surface Pro 6. This is the one I've got. And, look, you don't need a keyboard", he said, as he brought up the on-screen keyboard that really isn't very easy to type on. Oscar's congenital positivity was so alluring that I had to insert a pause and ask him what phone he had. He pulled out the same iPhone XR as mine, but sadly in a case. "I've been with Apple for a long time", he explained. "But I just need to pay my iPhone down a bit more, and I'm going to switch to this Note..."

Apparently, the conversion was “all in your mind” and once you get a “growth mindset” you start to realise that leaving your iPhone behind represents growth.

It didn’t work of course. Matyszczyk was a card-carrying member of the Tame Apple Press and reminded himself that three Apple phones were coming out which would give him the growth he needed. That's enough… Sad really.