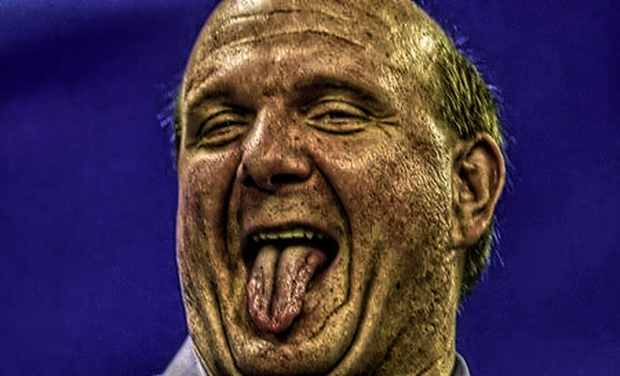 The shy and retiring former CEO of Microsoft Steve “there’s a kind of hush” Ballmer has whispered to the assembled throngs at GeekWire Summit 2019 that PCs are still lucrative.

Ballmer [gods how we miss him] claimed hardware profits will continue to be lucrative and Windows remains very much at the heart of the vendor's strategy.

As blood poured from the ears of the assembled throngs,  Ballmer revealed that he is still involved with Microsoft's hardware business and under NDA.

"I am an outsider under SEC regulation, with the exception of the hardware group where I am under non-disclosure which does restrict some of my trading, which I don't do; I hold my Microsoft stock", he said.

Ballmer said that Microsoft's cloud success is playing out in a way that he and the vendor had expected when he was still at the helm, enabling it to enter areas in which it typically hadn't played.

"The company has the opportunity to essentially replace labour with technology. The number of people needed in a company to set up things, distribute them, and set up servers goes down - and when you replace labour you can move to a lower cost expense.

"And the speed at which solutions can be deployed increases so you get more total development of software. So the cloud has worked out well and the company has done an amazing job of execution. I give people at the company great credit."

The former CEO remains a strong advocate of Windows, denying that the operating system is being forgotten by Microsoft.

He said that it would be difficult for the vendor to create a revenue stream with such strong profitability again.

"The other thing which is still coming into fruition as a big business is the hardware business", he claimed.

"I am delighted with what the company is doing with the product line. Despite the rhetoric, there is actually plenty of profit in hardware, at least if you look at the number one hardware company in the world. There is a lot of profit being made on the Mac, and the iPhone, and I think Microsoft gets a chance to participate through the Surface.

"Perhaps the most exciting thing is the strength of the Windows business. I read all sorts of rhetoric about Windows not being important to Microsoft. Windows makes billions and billions and billions per year - at least this investor wants to see that profit stream stay around for a very, very long time.

"There aren't a lot of new profit streams you can invent that generate the amount of profit that Windows does."