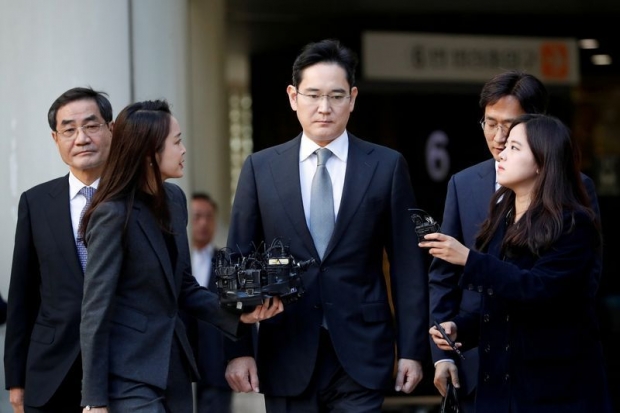 Two and and a half years

A South Korean court sentenced Samsung Electronics vice chairman Jay Y. Lee to two and a half years in prison on Monday, which could delay the group’s ownership restructuring following the death of Lee’s father in October.

Lee, the country’s most powerful businessman at age 52, had served one year in prison for bribing an associate of former President Park Geun-hye when an appeals court suspended it in 2018; a year later, the Supreme Court ordered him retried. His prison time will count against his latest sentence.

Monday’s sentencing by the Seoul High Court can be appealed to the Supreme Court within seven days, but legal experts said that because the Supreme Court has already ruled on it once, chances are low that its legal interpretation will change.

The Seoul High Court found Lee guilty of bribery, embezzlement and concealment of criminal proceeds worth about 8.6 billion won ($7.8 million), and said the independent compliance committee Samsung set up early last year has yet to become fully effective.

Residing Judge Jeong Jun-yeong said: "Despite some shortcomings... I hope that over time, it will be evaluated as a milestone in the history of Korean companies as a beginning for compliance and ethics.  “(Lee) has shown willingness for management with newly strengthened compliance, as he has vowed to create a transparent company."

Lee, dressed in a dark coat and silver tie and standing to hear the sentencing, sat down after it was read. He did not comment when given a chance by the judge.

During his final statement to the court in December, Lee had said that he wants to “make a new Samsung”.

Last modified on 18 January 2021
Rate this item
(2 votes)
Tagged under
More in this category: « Online misinformation dropped after Trump ban Americans more worried about being hacked than murdered »
back to top