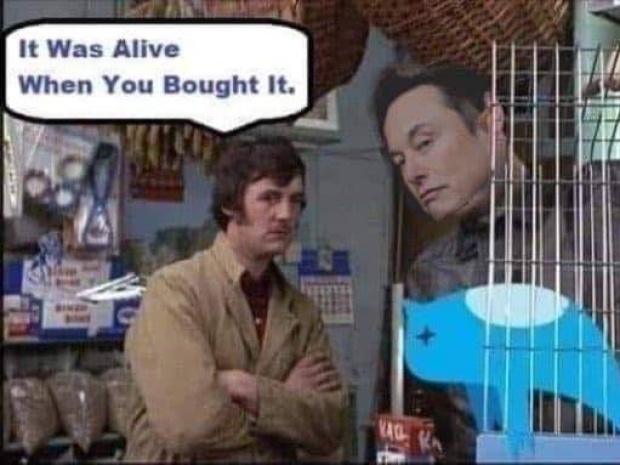 Apparently the Tumbleweed which remained could not code

After a few weeks of wrecking the social notworking site Twitter, by initiating a purge on staff which made Stalin look like an amateur, supreme twit Elon [look at me] Musk said he is hiring again.

Musk is believed to have fired two-thirds of Twitter’s 7,500-person workforce in three weeks, and in a meeting with those staff who stayed Musk said that the layoff period is over had he is recruiting for roles in engineering and sales.

Twitter's sales department has lost almost all of its senior leadership since Musk took over. However, Musk mostly was worried about people not having the skills to code and who were prepared to work long hours to bring about his glorious plan.

Monday’s all-hands meeting was the first time that Twitter’s employees heard from Musk since he required them all to opt into staying for his “extremely hardcore” cultural reset, which led to roughly 1,000 resignations last week. While fielding employee questions for about a half-hour from Twitter’s San Francisco headquarters, Musk said there are “no plans” to move Twitter’s headquarters to Texas like he did with Tesla, but that it could make sense to be “dual-headquartered” in California and Texas.

Musk admitted that if he moved the company to Texas it would play into the hands of those who believe that that the company has been subject to a right-wing take-over.

Musk went on to say that, “to be the digital town square, we must represent people with a wide array of views even if we disagree with those views.” He didn’t address his firings of dozens of employees for posting tweets and Slack messages criticising him over the last couple of weeks.

One of his more bizzare plans is to have every Twitter employee sending weekly updates about their work via email.  We guess that they will have lots of times on their hands to do that if their bringing about Musk's Twitter 2.0 vision.

He said that “significant portions of the technology stack need to be rebuilt from scratch,” and at another point in the meeting he suggested it would be a good idea to “somewhat decentralise things” by setting up engineering teams in Japan, India, Indonesia, and Brazil.

Twitter’s historically strong usage in Japan was specifically called out by Musk as what the company should aspire to “ideally in every country without exception.”  We guess he is hoping one day that a staff member who fails to give him the honour he feels due will feel so terrible about it they will gut themselves in the Twitter carpark after writing a haiku on the futility of life.

As the company has lost value, Musk hopes that employees will be happy with stock options  and be able to cash them out regularly like at SpaceX, his other company that is also privately held. “

The way things work at SpaceX to get liquidity is that every six months there’s a liquidity event where the company buys back shares and we invite new investors to buy shares. And we’ll be able to operate Twitter in the same way,” Musk said.

Last modified on 22 November 2022
Rate this item
(2 votes)
Tagged under
More in this category: « Next gen chips going to cost more Time Lords order an end to leap seconds »
back to top