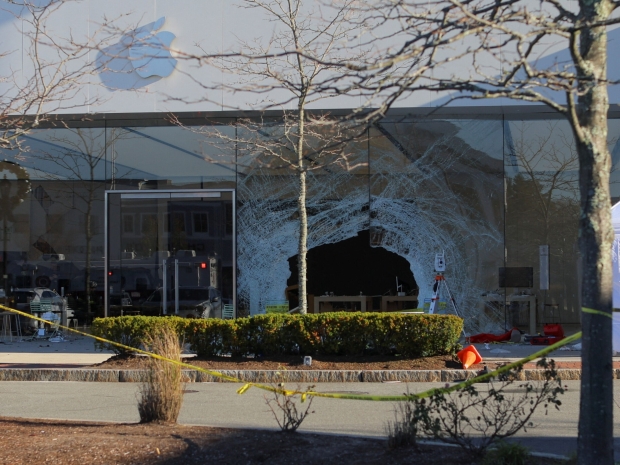 A load of bollards in Massachusetts car crash

Fruity cargo cult Apple has been sued over the crash at the Apple Store in Hingham, Massachusetts, because it failed to prevent it happening.

For those who came in late an SUV drove into the glass window of the Apple Store at Derby Street in Hingham. The SUV driver claims his foot got stuck between the gas pedal, causing him to lose control of the vehicle.

Fire marshalls and police who saw video footage of the accident believe it was deliberate and have charged the driver with “reckless homicide by motor vehicle.” One person died in the incident, and 20 people were injured.

Apple’s CEO, Tim Cook and a senior vice president at the company visited the victims at the South Shore Hospital.

However, it looks like lawyers for the injured and dying are suing Apple, the driver, the developer, the management, and the owner of the property for its negligence toward the safety of the store visitors.

Doug Sheff of Sheff & Cook law firm in Boston, the accident was easily avoidable had the store placed barriers or bollards protecting it from the traffic.  They believe that the bollards were not there because it interfered with the Apple stores’s esthetics.

For now, the Apple Store has been boarded up for investigation with barriers outside it; there is currently no information on when the store will reopen.

Last modified on 01 December 2022
Rate this item
(1 Vote)
Tagged under
More in this category: « TSMC will make 4nm chips in Arizona San Francisco police can use robots to kill suspects »
back to top