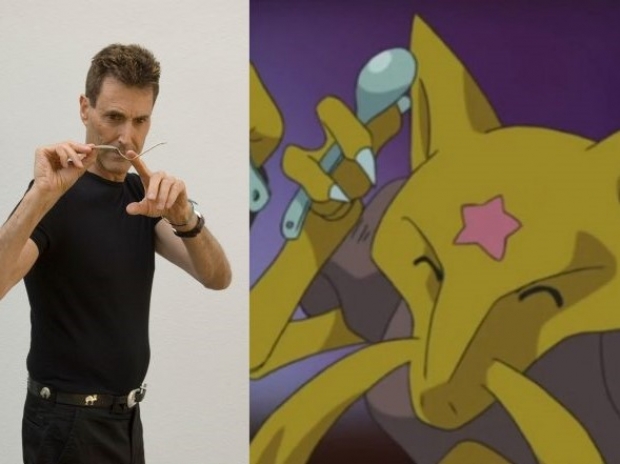 Kadabra can bend spoons after 20 years

For those who came in very late, on January 2000, Pokémon was sued by stage magician Uri Geller for $97 million over a Pokémon card with a similar name that carried the magician's trademark bent spoon.

He claimed that Pokémon's Japanese name and image were too close to his own and sued.

Kadabra has been a magic word since Ancient Egyptian times but the Pokémon's Japanese name — variously written as Yungerer, Yungeller, and Yun Geller — seems to be a reference to Geller. The fact he was depicted with a bent spoon whcih was Geller's trademark trick did seem to suggest some similarlity between brands.

Geller sued Nintendo over Kadabra in 2000, seeking damages and insisting the card stop being used in sets. "Nintendo turned me into an evil, occult Pokémon character. Nintendo stole my identity by using my name and my signature image", Geller said at the time. The fact that Geller got mobbed when he went X-Mas shopping in Tokyo by kids wanting him to sign their Un-Geller Pokemon cards didn't help much either.

As a result Kadabra hasn’t appeared in a Pokémon card game since 2003. Kadabra’s other evolutions, Abra and Alakazam, also have Japanese names that reference real-life magicians; those characters have appeared on cards by bypassing the Kadabra evolution.

"I am truly sorry for what I did 20 years ago. Kids and grownups I am releasing the ban. It's now all up to #Nintendo to bring my #kadabra #pokemon card back. It will probably be one of the rarest cards now! Much energy and love to all!"

Last modified on 30 November 2020
Rate this item
(1 Vote)
Tagged under
More in this category: « AMD sneak Warcraft, Dirt5 more RDNA2 features Gaming is good for you »
back to top