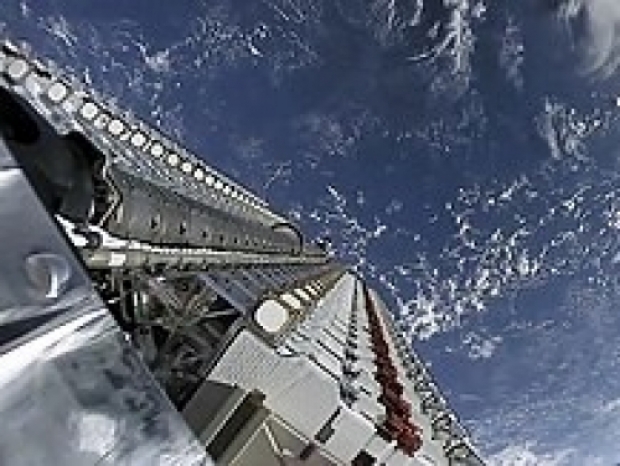 A beta tester of SpaceX's new Starlink satellite internet service tested his gear in a national forest which gets no cell service from any carrier.

He wrote in Reddit: " Works beautifully. I did a realtime video call and some tests. My power supply is max 300w, and the drain for the whole system while active was around 116w... It didn't work well with a heavy tree canopy / trees directly in the line of sight, as expected. I would be connected only for about 5 seconds at a time. Make sure you have as clear a view of the sky as possible!"

The Starlink beta costs $99 a month plus $499 upfront for the user terminal, mounting tripod, and router. A new speed-test data collected by Ookla and published by PCMag last week found average Starlink download speeds of 79.5Mbps and average upload speeds of 13.8Mbps in October, when the service was in a more limited beta.

The same data found average download speeds of 24.75Mbps for Viasat's Exede service and 19.84Mbps for HughesNet, both of which offer service from geostationary satellites. Upload speeds for Viasat and HughesNet were 3.25Mbps and 2.64Mbps, respectively. Starlink's low-Earth orbit satellites greatly outperformed the higher-orbit satellites on latency, with Starlink posting a 42ms average. Viasat and HughesNet came in at 643ms and 728ms, respectively, according to PCMag.

SpaceX's invitations to new users last week told them to expect "data speeds varying from 50Mbps to 150Mbps and latency from 20ms to 40ms over the next several months as we enhance the Starlink system. Latency appears to be heding towards to 19ms by summer 2021".

One Montana resident posted a speed test result with a 174Mbps download speed, 33Mbps upload speed, and 39ms latency. "Way out in rural Montana where our alternative is to pay by the gig. Starlink will forever change the game", the beta tester wrote on Reddit yesterday. The Starlink Reddit community has several resources for tracking beta progress, such as a list of user speed tests and a list of states where at least some people received beta invitations.

According to some early speed tests done in different locations around the US, users are getting anywhere from 100 to 203 Mbps on downlink and around 15 to 33 Mbps on uplink. Meanwhile, the latency varies between 20 to 45 milliseconds, which is pretty much in line with SpaceX estimates.

Pacific Northwest have been reporting rainy weather download speeds ranging from ~95-140Mbps, upload from 9-18mbps, and ping times from 32-34ms. The upper range is surprisingly not that different from other November clear-weather data which, while dramatically higher than September reports, is still supposed to improve over the coming year. The tolerance to adverse weather is likely due to multiple satellite paths as well as phased array tuning overcoming wind buffeting. SpaceX does plan to add additional higher frequency V-band transmission to future Starlink satellites, but this should suffer more bad weather attenuation than the current Ka/Ku-band.

Last modified on 09 November 2020
Rate this item
(3 votes)
Tagged under
More in this category: « Huawei appeals against Sweden’s 5G ban Ericsson supports Huawei over 5G ban »
back to top