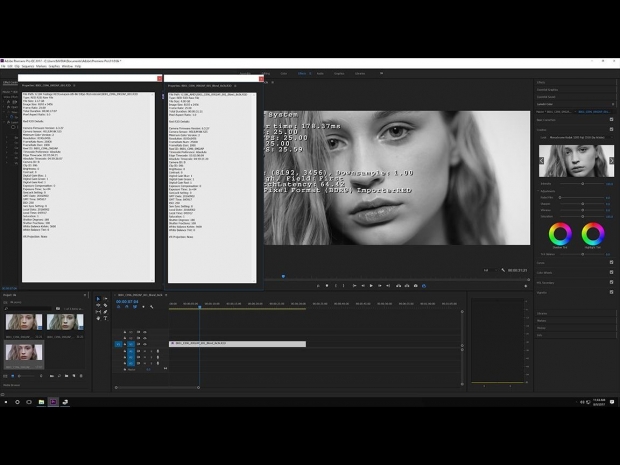 We have it on video

There was no hanky panky being played at Siggraph by NVIDIA and we have the proof.

The chain of events that have occurred since AMD was on stage at their Capsaicin event at Siggraph 2017, has led us from one interesting story to another this month. As we always do our best at reporting the most accurate information, we have been making sure to do our due diligence, and research to present this story as it has unraveled.

Following the story, that NVIDIA Quadro powers through 8K with ease, which we covered while at Siggraph 2017, AMD countered back with a claim that Nvidia was using "compressed" RED Camera source videos. AMD was extremely quick to provide us with their RED Camera RAW 8K "uncompressed" file so we could conduct our own investigation into the NVIDIA Quadro P6000's ability to playback, edit, and scrub at an 8K resolution.

This is where the interesting part of the story begins to kick in. Immediately knowing what we had seen on Siggraph show floor with our own eyes was real, and not pre-recorded video file we reached out to NVIDIA's Quadro team. We openly asked to see if could we spend some time with the actual system that was used in the demo booth by NVIDIA. At the time we contacted NVIDIA, we did not tell the Quadro team exactly for reasoning of why we wanted to spend some hands time on the system. A little bit to our surprise, the system had just arrived back in their Santa Clara office, and they had no problems of getting us access to it as they felt that they had nothing to hide.

The next day, upon getting access to the system, the first thing we did was to inspect the system to make sure the build was in the same configuration that we had been shown at Siggraph only the week prior in Los Angeles by NVIDIA on the show floor. 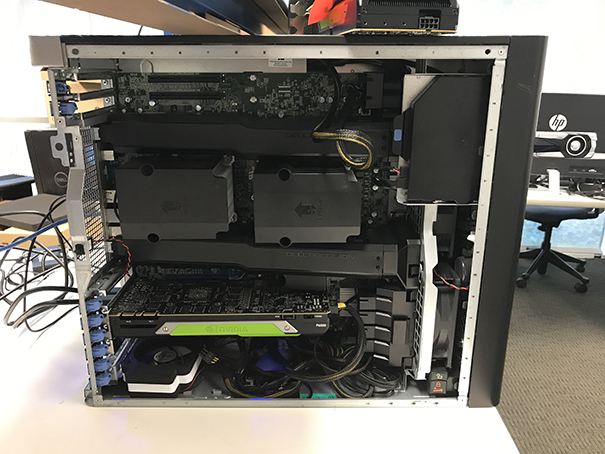 We opened the system and looked it over from end to end, to make sure that we looked over the entire system to make sure NVIDIA did not have any hidden faeries inside working their magic. 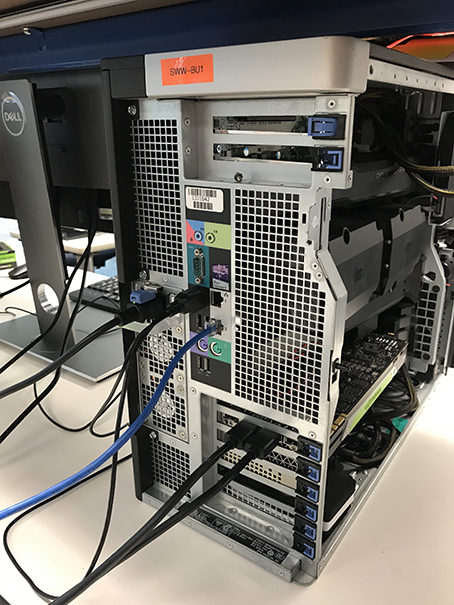 Sadly, to our disappointment there were no scantily clad faeries to be found. Dawn and Dusk must be busy at work somewhere else at Nvidia.

After inspecting the hardware to make sure that there was no "magic", trickery, or tomfoolery going in the hardware build, we wanted to make sure that we were in a true 8K (7680x 4320) editing environment so there would be no accusations that what we were doing was occurring at a lower resolution. A decision was made to up the ante since we were not constrained on having to present to a large show floor audience utilizing large television format. Nvidia give us access to a Dell UP3218K display (7680x 4320). To have this monitor at our disposal for testing was an amazing bonus. 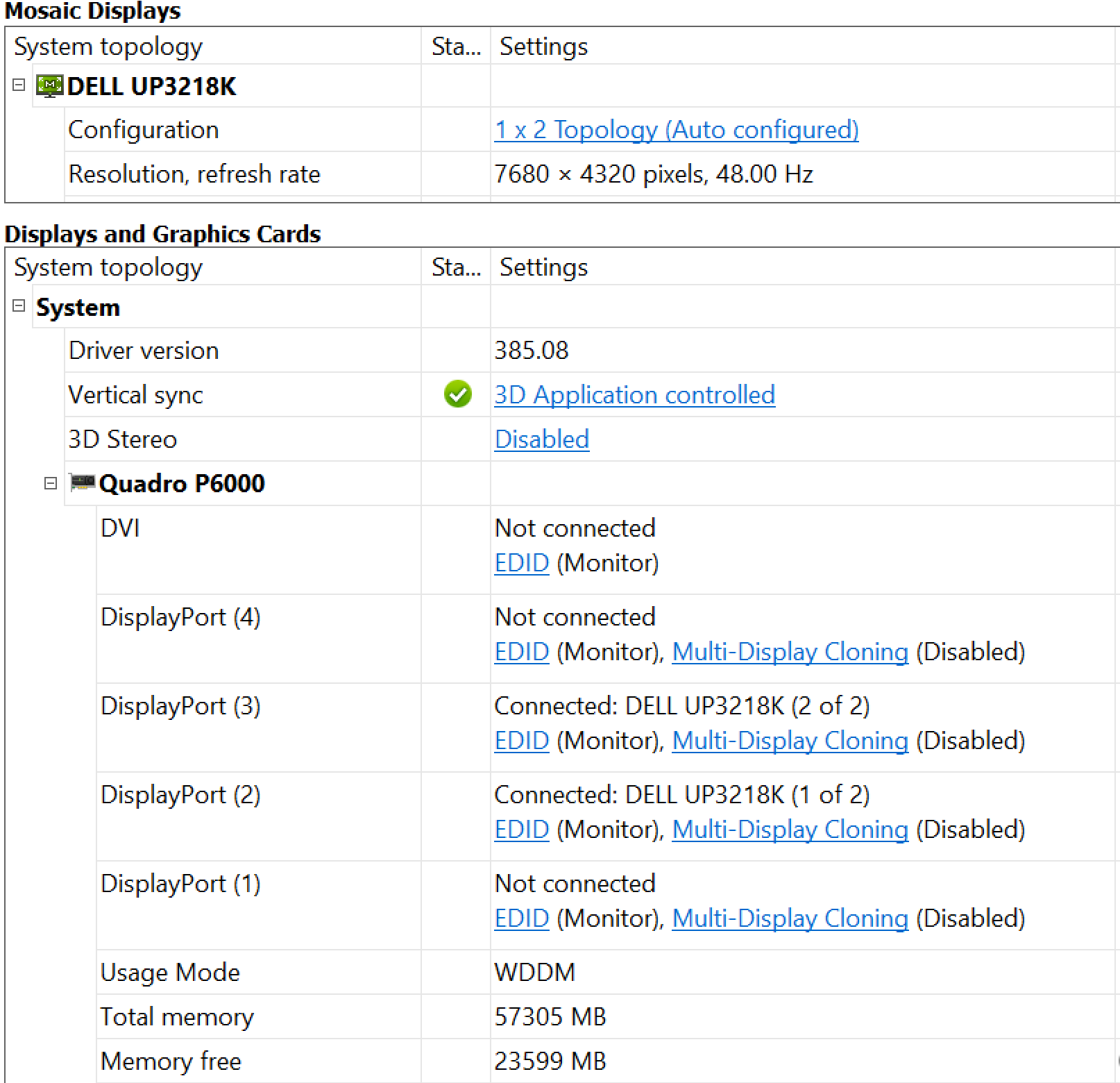 The first claim that AMD made about the demo, which we were able to disprove was that NVIDIA demo was using a "compressed" file format. To get to the bottom of this, we pulled up both the video file that NVIDIA used, as well as the video that AMD provided to us side-by-side in Adobe Premiere. 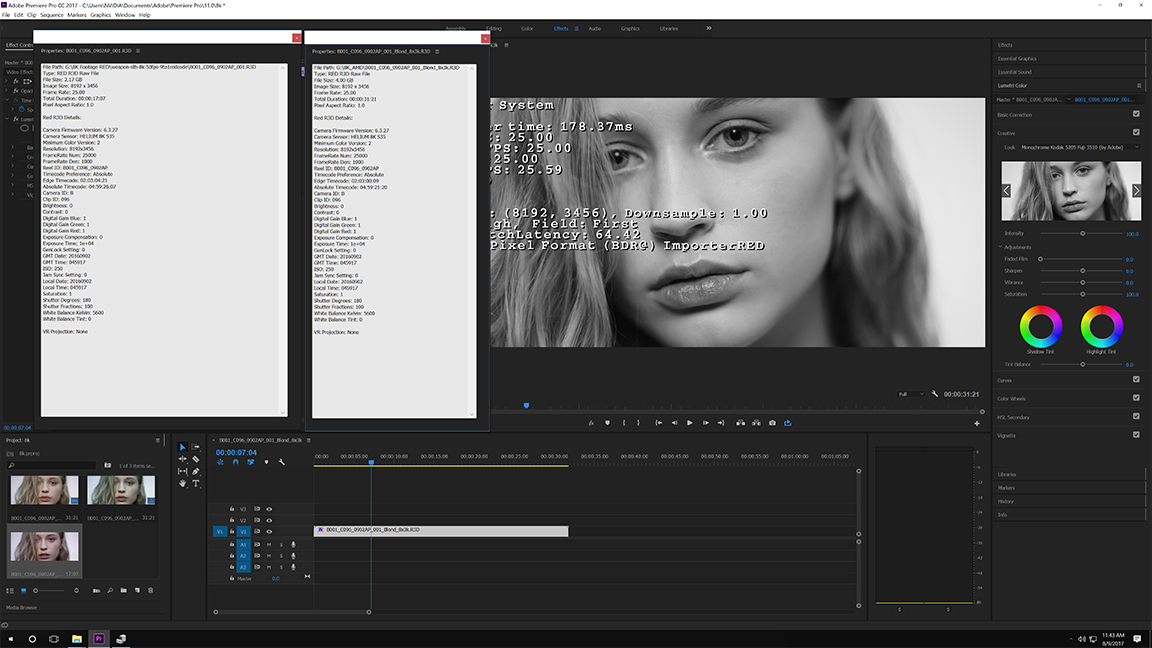 What quickly became apparent once we did a side by side of the two file properties was that as we suspected. The files were both RAW and uncompressed and that the only difference was that the files were of different length. As you can see by the files brought side by side below in Adobe Premiere.

It was admitted to us, by AMD after presented with rebuttal evidence, that in fact the only difference between the files was the actual length of the clip and that the file length was what was being referred to as “compression” by AMD representatives.

With the claim of “file compression" now in the rear-view mirror, the next claim that was made to us by AMD was that NVIDIA was using more RAM than should be necessary, as well as making use of a high end SSD storage controller. We quickly countered that anyone spending $6999 on a video card (AMD or NVIDIA) would not skimp by using a low cost i7 CPU or cut corners on beefing up a workstations' RAM. Even with this claim being presented to us, we knew better but still wanted to conduct some additional research.

We reached out to some of our studio contacts who all confirmed what exactly what we expected, that workflow was important when designing a system.  One studio executive went as far as saying that, "the more RAM the better and the cost is well worth the drop in help desk tickets about "slow" machines and an increase in the productivity and creativity of our employees whose salaries constitute the bulk of our expenses." Our studio executive contact additionally let us know that AMD was partially correct on one aspect, on that if you were cutting costs to an absolute bare minimum of an Intel Core i7-7820X (8-cores, 16-threads, 3.6GHz) would suffice. In that same system configuration, 128GB DDR4 RAM, a 1TB Samsung 950 EVO (boot/cache drive), and a local SSD array (RAID 10) with enough for the project would be the absolute minimum requirements. All of the studios, and production teams mirrored this view of what a workstation configuration entails.

Update:  One commenter pointed out a little confusion we have caused on the R3D file format and the format's file compression.  R3D is proprietary file format that "efficiently encodes measurements from a camera’s digital sensor in a way that maximizes post-production capabilities. It achieves this in part by storing each of the sensor’s color channels separately, prior to conversion into a full color image. Similar to the advantages that RAW files brought to stills photography, this improves control over white balance, exposure and grading in post-production."  We have updated the phrasing to reflect this.  More information can be found here about the R3D format and how it's format compression works.

Last modified on 16 August 2017
Rate this item
(0 votes)
Tagged under
More in this category: « Smart lighting use set to soar ISS gets its own supercomputer »
back to top