The Turing-based graphics cards will also be the first, and currently the only gaming graphics cards with GDDR6 memory, which not only brings higher bandwidth but several other improvements like power efficiency and reduction in signal crosstalk.

The most noticeable improvement in shading is Mesh Shading, a new shader model for the vertex, tessellation, and geometry shading stage which provides more flexible and efficient approach, by offloading object list processing from the CPU to the GPU mesh shading as well as enabling new algorithms for advanced geometric synthesis and object LOD management. 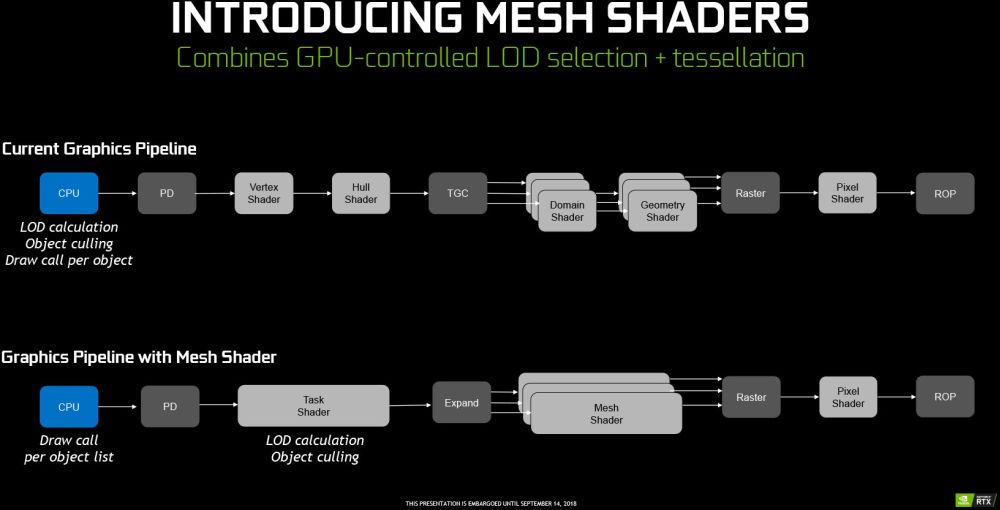 The Variable Rate Shading (VRS) allows developers to control shading rate dynamically, shading as little as once per sixteen pixels or as often as eight times per pixel. This is an evolution of the previously available techniques like Multi-Resolution Shading (MRS) and Lens-Matched Shading (LMS). Nvidia has now brought three new VRS-based algorithms including Content Adaptive Shading, which reduces shading rate in regions of slowly changing color, Motion Adaptive Shading, which decreases shading rate on moving objects, and Foveated Rendering, which reduces shading rate in areas which are not in viewers focus, and quite important in VR. 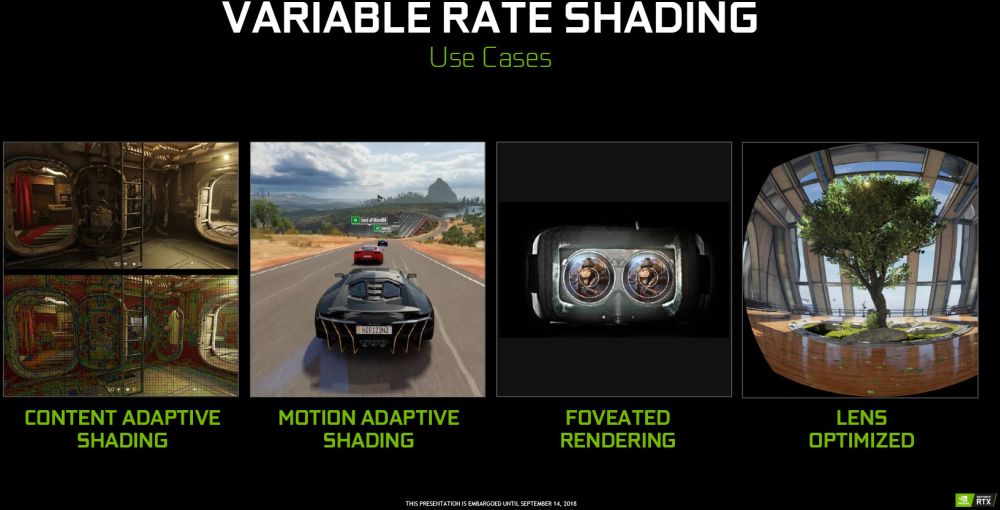 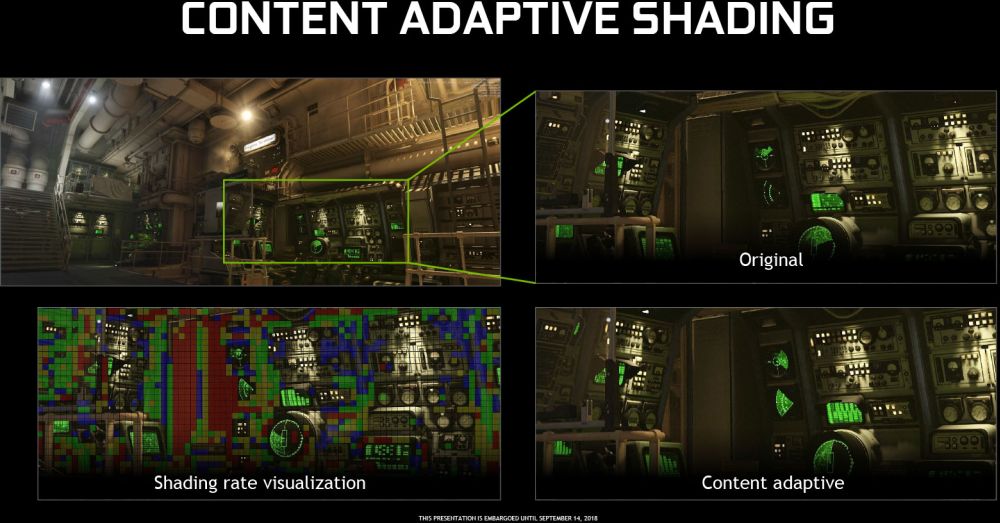 With texture-space shading (TSS), objects are shaded in a private coordinate space (a texture space) that is saved to memory, and pixel shaders sample from that space rather than evaluating results directly. With the ability to cache shading results in memory and reuse/resample them, developers can eliminate duplicate shading work or use different sampling approaches that improve quality.

Multi-View Rendering (MVR) is an extension to the Single Pass Stereo feature, which now allows rendering of multiple views in a single pass even if the views are based on totally different origin positions or view directions, especially important to accelerate Virtual Reality (VR) rendering. 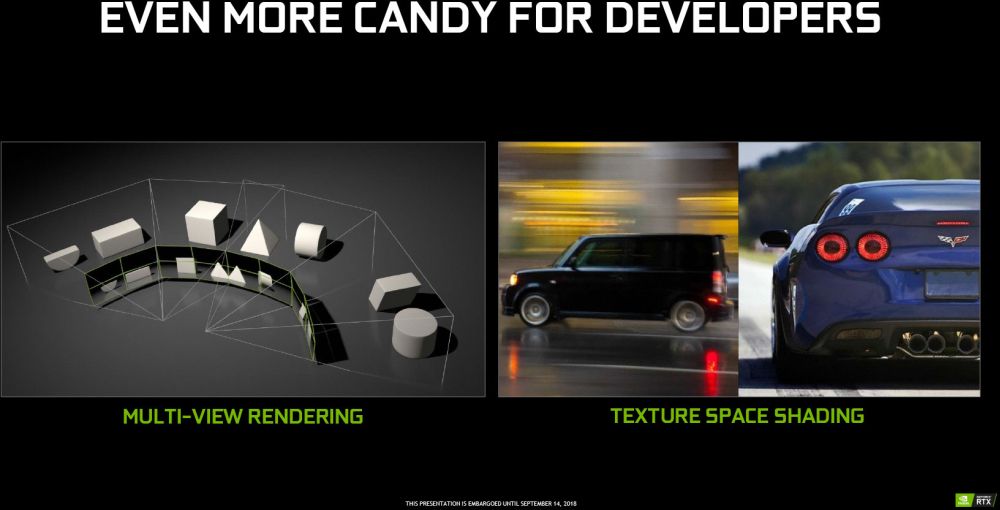 The Nvidia Turing GPU is the first to utilize the GDDR6 memory and it brings several improvements in terms of speed, power efficiency, and noise reduction. Running at 14Gbps signaling rate, the GDDR6, which was developed in close cooperation with the DRAM industry, should bring increased performance while lowering power consumption by 20 percent and reducing signal crosstalk by 40 percent, at least compared to the GDDR5X memory used with Pascal GPUs. 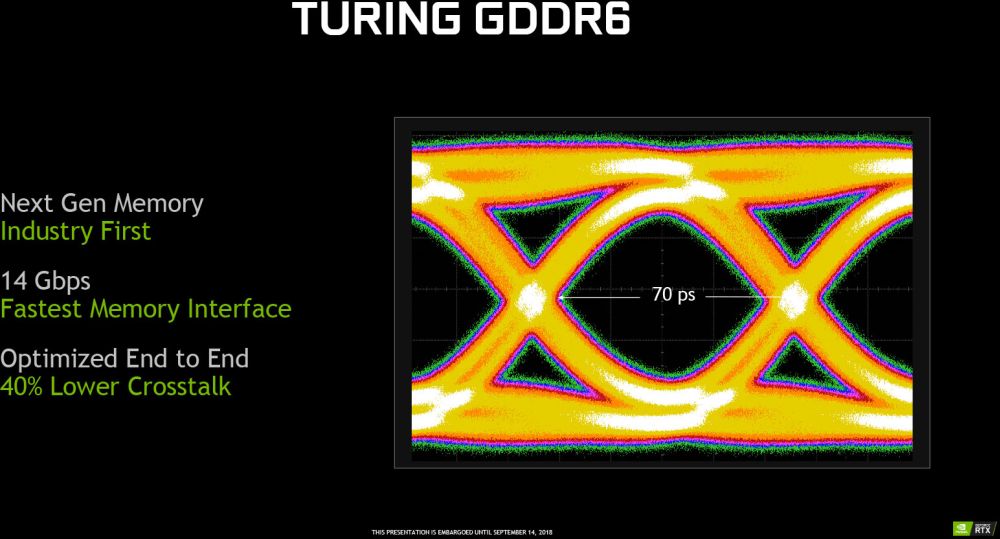 Nvidia also improved the memory compression, which comes as a result of improved compression engine which uses algorithms to determine the most efficient way to compress the data based on the characteristics. In short, it reduces the amount of data written out to memory and transferred from memory to the L2 cache and reduces the amount of data transferred between clients and the frame buffer, bringing a 50 percent increase in effective bandwidth compared to the Pascal architecture. 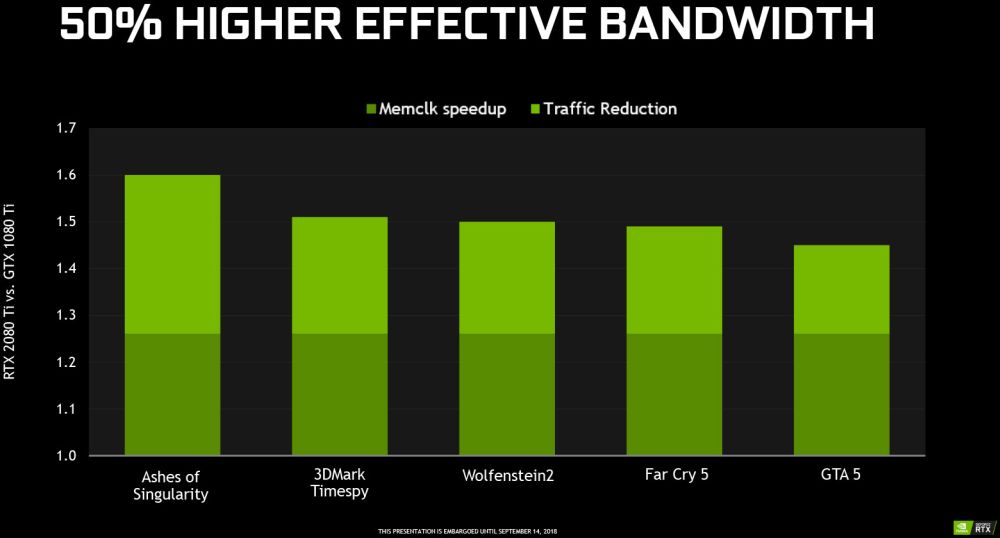