Due to a tight schedule and the logistical nightmare that usually happens when there is a hardware launch, we did not manage to check out everything so we will keep updating the article in the next couple of days as well as add a couple of other articles that will focus on Nvidia’s Geforce RTX-series.

The sheer complexity of the Turing GPU as well as the new features, which are not yet available, are simply overwhelming and we are quite sure that there will be a lot of talk about Nvidia RTX-series in the day to come as well as future games, which should bring support to some of those RTX features, start to appear.

We also focused testing only on higher resolutions, as it is highly unlikely that someone could use high-end RTX-series for lower resolution gaming as even the RTX 2080 has enough power to come close to 60fps at 4K/UHD resolution in most game titles at high graphics settings. Bear in mind that the performance difference is bigger at higher resolutions, so it could be smaller at 1080p.

As far as UL 3DMark performance goes, the RTX 2080 Ti and the RTX 2080 Founders Edition are showing the power of a new architecture, and even without fancy new features, they outperform everything launched so far. Although not on the list, even the mighty Titan V is left behind by the new king of the hill, the Geforce RTX 2080  Ti. 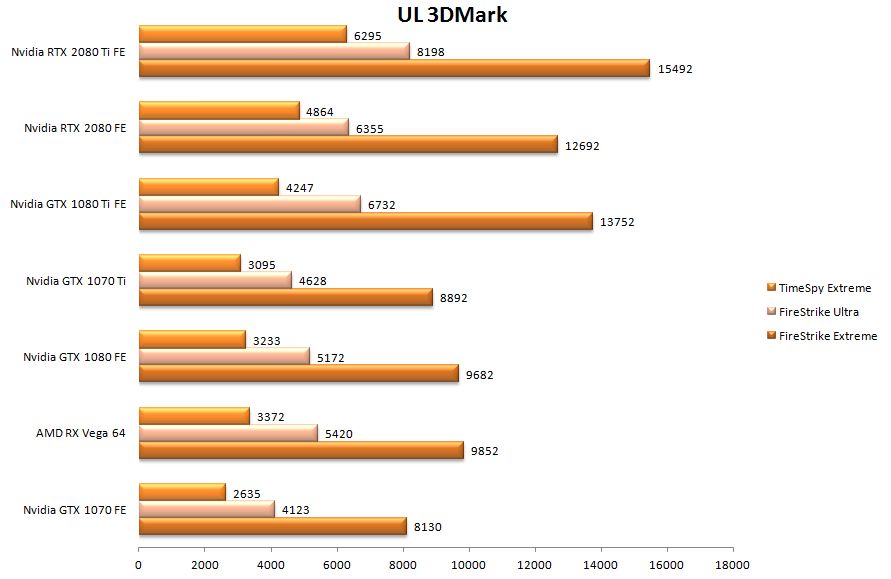